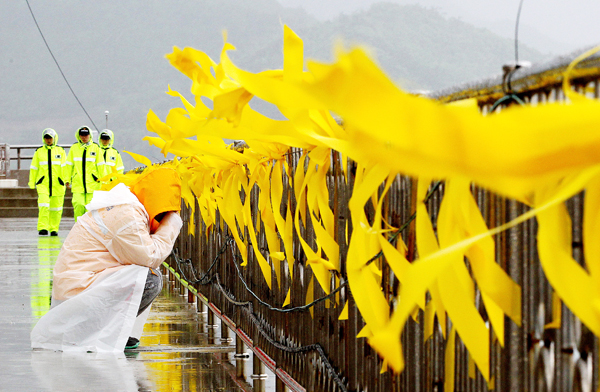 A relative of a passenger aboard the sunken Sewol ferry weeps at a port in Jindo, South Korea, in April. President Park Geun-hye accepted Prime Minister Chung Hong-won’s resignation over the government’s handling of a deadly ferry sinking. [AP/NEWSIS]

Central bankers have much to worry about these days - managing Federal Reserve tapering, bracing for slowing Chinese growth, sussing out whether the true enemy is inflation or deflation. But ferry accidents?

This is Lee Ju-yeol’s nightmare. The new Bank of Korea governor had been on the job just a few weeks when his nation suffered its worst human tragedy in decades: the April 16 capsizing of the ferry Sewol, which left more than 300 of the 476 passengers and crew dead or missing (most of them high school kids).

The disaster has triggered intense soul-searching in Korea, which revels in its incredible transformation from impoverished, war-torn backwater into one of the world’s 15 biggest economies. Yet as Koreans question the very foundations of their development miracle, the brutal self-examination is having an unanticipated and potentially dangerous effect on the economy, and the risks are rising.

Lee’s team is now mentioning the Sewol crisis with increasing frequency in discussions about monetary-policy decisions. Analysts like those at Woori Investment and Securities are putting out reports with titles like: “Growing Concerns Towards Domestic Economic Slowdown Due to Ferry Disaster.” The government is mulling ferry-related stimulus efforts. It’s amazing to think that of all the things skeptics thought would trip Korea up - too much household debt, overleveraged banks, a dearth of innovation - the real “black swan” may turn out to be the nation’s ferry system.

Let’s not exaggerate the damage to an economy that, until recently, was growing 3.9 percent. But a report by long-time Seoul-based journalist Evan Ramstad for the Center for Strategic and International Studies shows why the risk can’t be ignored. The former Wall Street Journal reporter concludes that Koreans are experiencing grief akin to those of Americans after the Sept. 11, 2001, terrorist attacks. “There’s been shock, shame, anger, outrage, and recrimination,” Ramstad says. “But those feelings have been manifest in a collective withdrawal that is producing an economic effect.”

Across Korea, public activities have been halted; spring festivals cancelled; corporate and cultural events scrapped; new product rollouts postponed; school trips put off; vacations delayed; ferry schedules lightened. A collective air of austerity is encouraging both executives and households to close wallets. The energetic consumption that dominated Korea in the pre-Sewol world now seems crass and disrespectful to many.

“It’s a development that stands out from other moments of national trauma in South Korea’s recent history,” Ramstad argues, noting that even North Korean provocations have never “produced an economic standstill like this.” The reason is that the Sewol is a Made-in-Korea disaster brought on by cut corners, a lack of public oversight and a regulatory system corrupted by incestuous ties between the public and private sectors. The tragedy exposed structural cracks in Korea’s economic miracle.

So far, no prominent Korean has managed to bring closure to the episode. The focus is still on punishment, not national healing. That’s important, of course. Koreans were screaming for justice and President Park Geun-hye is smart to serve some up expeditiously with her approval ratings in the mid-40s. The first step came last month, when Park accepted the resignation of Prime Minister Chung Hong-won, whose handling of the ferry crisis stoked public anger. Last week, prosecutors charged four crew members with homicide, while 11 more crew members face trial on a range of charges.

My real worry is that Park will lose the sense of audacity she has sometimes displayed. Will the Sewol prompt Park to slow efforts to rein in the huge, family-owned conglomerates known as chaebol, to build a more creative economy and to empower women? “Unfortunately, one outcome of the Sewol incident is likely that South Korean politicians, bureaucrats and reformers will not be able to do bold, big things for quite a while,” Ramstad argues. “They will be too busy protecting themselves from the fallout of the disaster.”

The real tragedy would be for Koreans to forget how far they’ve come and what heights they’re still capable of achieving. Park must work harder to keep Korea’s economic prospects from sinking along with the Sewol.