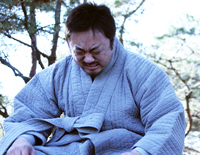 Iconic filmmaker Kim Ki-duk is back with his 20th work, and this time the film is full of symbols that hint the turbulent times of modern Korea. Through the death of school girl Oh Min-ju,-whose name means demos in Korean- Kim follows how the seven murder suspects are terrorized by the other seven shadows, led by Shadow Leader (Ma Dong-suk). Kim, who wrote, shot, and directed “One on One” raises question on Korean society’s prevalent distrust, conflict and wrath. Kim Ki-duk explicitly noted that his recent work is a tribute to the former president Roh Moo-hyun. 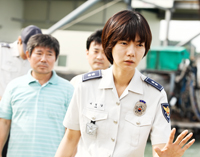 Starring Bae Doo-na and Kim Sae-ron, “A Girl at My Door” is a poignant, subtle human drama that conceals gives away just enough and forever leaves the viewer wondering.

Bae plays Young-nam, a police officer who has been transferred to a quiet seaside town where she’s been told to “stay quiet.”

And while she tries to obey orders for the one year that she’s stationed there Young-nam starts rocking the boat when she meets Do-hee (Kim Sae-ron) who is the victim of abuse.

With her drunkard stepfather--played by the talented Song Sae-byeok, grandmother and even peers out to bully her, looking after Do-hee becomes a full-time occupation.

Do-hee for her part becomes enamored by her lady knight in shining armor which annoys Do-hee’s stepfather even more. Those grey areas that are ignored by Korean society is put in the spotlight in this drama that Bae called “full of blanks.” Bae confessed that the plot of two lonely females won her over right away and decided on the project “in record time.” The film made the official segment of this year’s Cannes and is a courageous attempt by first-time feature director July Jung.

Alex Ulloa (Hugo Silva) kills his own wife Mayka Villaverde (Belen Rueda), a wealthy business woman, in order to live a new life with Carla Miller (Aura Garrido), with whom he has been enjoying secret affair. However, he gets dumbfounded as Mayka’s corpse goes missing. Detective Jaime Pena (Jose Coronado) then begins to suspect Alex is behind everything. Alex tries to interrupt the investigation by setting a plausible alibi, but he soon detects some possibilities that his wife Mayka might come back to him sooner or later.

Spanish director Oriol Paulo, though unfamiliar to Korean filmgoers, has established himself as a screenwriter and director throughout the time, mainly focusing on career in his country. In this film, Paulo unfolds the Hitchcock-style crime thriller, which will definitely appeal to local film lovers as well.

After Captain America and his colleagues swept Mapo District, western Seoul in April, Spider-Man came shortly after to continue the craze. However, as their name might hint, the X-men are not as patriotic as Captain America, nor are they as cute as Peter Parker. But these mutant superheroes, led by Professor X (James McAvoy), have long been Korea’s most beloved movie characters for a long time.

In this new sequel, the ultimate X-men are assembled in order to fight a war for the survival of the species. Bryan Singer, who also directed the X-Men: First Class in 2011, continues the work but puts the heroes back to the past, to fight in a battle that will save the future.

Hugh Jackman once again plays Wolverine, along with Jennifer Lawrence as Mystique. Ellen Page, who appeared in the X-Men: The Last Stand (2006), is back as Shadowcat and plays a significant role in the combat.

Directed by Wally Pfister, the cinematographer behind “Inception,” this Johnny Depp sci-fi promised big things. But unfortunately, the only impressive thing about the film is the A-list cast from Depp to Morgan Freeman, Rebecca Hall, Paul Bettany and Cillian Murphy.

In theory the film opens up some interesting debate: is it possible to have an omniscient, omnipresent computer that is also self aware?

But something happens in its trajectory from theory to actualization and the film fails to transcend.

Depp plays Will Caster, a scientist that is on the brink of creating artificial intelligence that will be undistinguishable from, err a human being.

When Caster gets shot by an anti-technology extremist, his wife Evelyn carries on without him by uploading Caster’s brain online. Before long Caster shows up on every monitor (where there is internet connection) and sets up headquarters in a rundown town and starts building an army. With the internet at his disposal, Caster is able to increase his capacity at an incredible pace and is capable of bringing people back from the dead. It soon becomes apparent that Caster is unstoppable so long as there is a computer nearby.

But while his fame catches on, the same anti-technology extremists that killed his physical body won’t stay silent. Evelyn must make a choice, to stay by her computer man or listen to the advice of those that tell her to run.

The giant lizard that shoots radiation out of his mouth is back. While he rears his big head towards the latter half of the film the force that this legendary monster brings with him is undeniable. For those not so familiar with the 1998 Hollywood remake or the Japanese original film from some 60 years ago, it’s easy to mistake Godzilla for anything from a villainous alien, dinosaur stuck in a time limbo or a mutant monster. And as often is the case when watching films of this genre, it’s best to leave logic at home.

The story unfolds as a pair of disturbingly hideous creatures hatch from underground, and obviously makes its way up.

Despite all the scientific advances at man’s disposal is not enough.

And although he turns up late, Godzilla does a good job of telling us why he’s there: to save humanity of course, whether by chance or intentionally is not up for discussion.

For a giant-creature film, the human acting component is quite impressive, too. Bryan Cranston, Juliette Binoche and ken Watanabe play the roles of helpless humans to perfection.

If you’re thinking it’d be similar to King Kong, or even one of the Jurassic Park movies, you’d be surprised to know that Godzilla does not care for humans. His lack of response to human activity is both engaging and amazing to witness and the large creature imparts some subtle lessons about the toll of messing with nature.