20 years on, master back to play Seoul

20 years on, master back to play Seoul 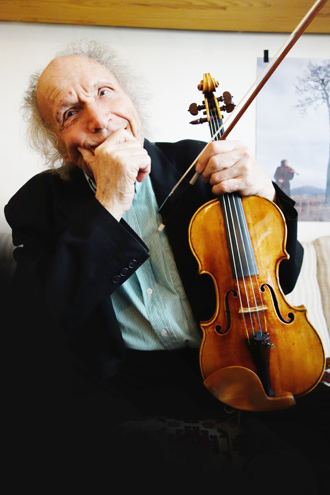 The last of the golden generation of masters, 94-year-old Israeli violinist Ivry Gitlis, has come to Korea to hold what will likely be his last concert in Seoul.

As the oldest active violinist alive, Gitlis has worked with renowned orchestras around the globe, not to mention having jammed with John Lennon and the Rolling Stones.

Meeting such a virtuoso, says Kim Min-kyun, a first violinist and concert master at the Korean Symphony Orchestra, makes “young violinists [like himself] tremble with honor.” Kim said since it’s Gitlis’s first visit in about 20 years, and that this concert will probably be his last in Korea, it is an “unmissable opportunity” for local classical music fans.

“I don’t exactly remember when I came to Korea last, but I know it was the last century,” said Gitlis on Wednesday, a day after he arrived in Seoul for his concert on Sunday.

Gitlis also held a master class at Unesco Hall yesterday and will hold one today at the Korea National University of Art.

Gitlis said he asked his parents for a violin when he was 4 years old.

“I don’t know why I wanted a violin,” said Gitlis. “If I knew how difficult my life would be, I wouldn’t have asked for it. I would’ve asked for an airplane or something.”

He eventually received the instrument on his fifth birthday and has played ever since.

For Gitlis, “music is the only communication element that can communicate with people all over the world,” adding that he doesn’t perform to parade his skills or to show off new techniques but to express how he feels to audiences all over the globe.

This is probably why Gitlis hasn’t yet picked what to play for the second part of his show. In the first part, Gitlis will perform Hindemith’s Sonata for violin and piano (Op. 11-1) and Beethoven’s Sonata for violin and piano No. 5. But after an intermission, the program states that the musician will perform pieces “chosen by Mr. Gitlis on the stage.”

Gitlis said many people ask him why he continues to play the violin at such an old age. He always counters, “Try and stop breathing for an hour or two.”

“What makes me play? It’s like breathing,” said Gitlis. “When people ask me why I don’t stop, I don’t understand. I don’t stop playing like you don’t stop breathing.

“Playing music is the only way to express something that’s inside of me.”

Gitlis also talked about how music today is becoming “too standardized.”

Musically interpreting this, Gitlis said it’s good “because we as musicians, we have the music written by somebody else. Every performance from different artists should be different.”

Gitlis went on to explain that it’s not that he believes everybody should make an effort to look for individuality as “each one of us is already different.”

Kim, from the Korean Symphony Orchestra, agreed and said it’s becoming more and more difficult to distinguish between musicians after listening to their records.

“When I listen to musicians from a long time ago, I can instantly recognize who that is,” said Kim. “But recently, there’s no individuality, and I think the way musicians today express sound is becoming more and more similar. Maybe that’s why we call musicians like Gitlis masters of the golden generation.”