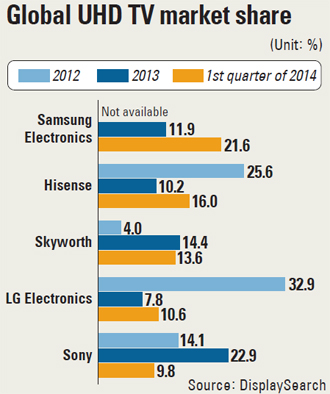 Samsung Electronics has jumped to the top of the global ultra-high-definition TV market thanks in part to fast growth of its high-tech curved TVs.

Sony continued to struggle in TVs with competition from both Korea and rising Chinese brands.

According to market researcher DisplaySearch, Samsung’s global market share in UHD TVs in the first quarter was 21.6 percent. That is nearly twice its market share for 2013, which was 11.9 percent.

Sony, which led the market last year with a 22.9 percent share, plummeted to No. 5, selling only 9.8 percent of the UHD TVs bought in the three-month period ending in March.

Samsung credited its remarkable growth to the diversification of its lineup, including the curved UHD TV released earlier this year.

“We got into the market late, introducing the products only in the second half of last year,” said an official of Samsung Electronics. “We will further bolster our UHD TV lineup this year.”

Samsung rolled out four UHD TV products last year. This year, it plans to expand the lineup to 15 or more.

The curved televisions are considered its flagship products in the UHD TV market.

Kim Hyun-suk, a senior executive of Samsung’s TV unit, said in a statement that the company “will spur the popularization of curved UHD TVs” and suggested they will become a “new paradigm for the TV industry.”

“The UHD TV currently accounts for only 2 or 3 percent of the entire global TV market,” said John Park, an analyst with Daishin Securities. About 100 million televisions were sold worldwide last year and 1.5 million of them were UHD TVs, he said.

“But, the market is quickly realigning itself toward UHD TVs and seizing leadership in UHD TVs could put Samsung at a greater advantage as it bolsters its dominance in the TV market,” Park said.

By region, Samsung had a 35.9 percent share in the North American TV market, 42.7 percent in Europe and 36.6 percent in Latin America.

LG Electronics came in second in the flat TV market with 16.9 percent. Sony came in third at 6.8 percent, followed by Hisense at 6.4 percent and Sharp at 4.7 percent.

LG Electronics also advanced significantly in the UHD TV market, coming in No. 4 in the first quarter with a 10.6 percent share. It was No. 8 in the fourth quarter of last year with a 6.9 percent share.

LG plans to introduce five to six UHD products this year including an organic light-emitting diode UHD TV to be released in the second half of this year, according to an official from the company.