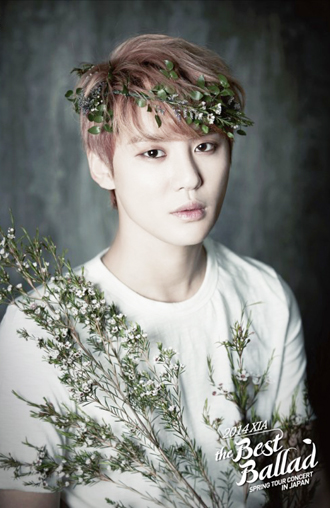 Singer Kim Jun-su of K-pop trio JYJ finished a solo concert in Osaka on Saturday, after pleasing more than 60,000 fans in Japan through the month.

Touted as “2014 Xia the Best Ballad Spring Tour Concert in Japan,” the concert by the 27-year-old singer, who goes by the stage name Xia, included orchestral performances of his ballads, songs from the musicals “Mozart!” “Elisabeth” and “December,” along with solo numbers from his Korean and Japanese albums.

After opening in Tokyo May 13-15 at Yoyogi National Stadium, Kim headed south a week later to sing in Osakajo Hall, one of the biggest concert halls in Japan.

During the three-hour show, he gave a pleasant surprise to his Japanese fans by singing acoustic versions of his former group TVXQ’s songs, which he had not done since leaving the group in 2009.

Having debuted in 2003 as part of the K-pop pioneer boy band TVXQ, Kim Jun-su has established himself as one of the most successful K-pop icons in the last decade. From 2009, he started to emphasize his musical stage career, and won wide recognition as a musical performer.

In July, he plans to launch a gothic musical “Dracula,” an adaptation of the Broadway musical of the same title, at the Seoul Arts Center.