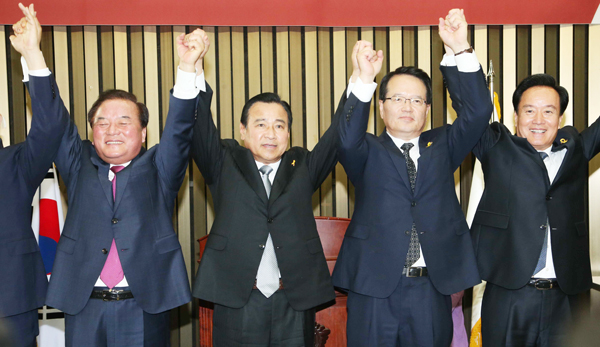 One hundred and forty-seven Saenuri lawmakers voted before the weekend to elect the next speaker to replace incumbent Kang Chang-hee for a two-year term. It was initially anticipated that Hwang would emerge victorious, especially considering his close ties to President Park Geun-hye.

The fact that Hwang, who is also a five-term lawmaker, stepped down as the Saenuri chairman just less than a month after completing a full two-year term - a first among ruling party chairmen since 2002 - raised anticipation that the former judge would comfortably beat his Saenuri contender, who is not known to have close presidential ties.

But the outcome of the vote went far beyond expectations. “I will strive to make a National Assembly that is trustworthy and loved by the people,” Chung, 66, a former neurosurgeon from Busan, said after the vote. “If there is a need for change, I will make a call [to the president] or visit her in person to make my point. Please help me build the authority and legitimacy of the National Assembly.”

Chung is set to begin his term this Friday, when he will officially replace Kang, who is also from the ruling party. Two vice-speaker positions will be shared by the Saenuri and the main opposition New Politics Alliance for Democracy (NPAD).

Chung ran for National Assembly speaker two years ago, facing off against Kang, a former military man who is part of the pro-Park faction within the ruling party, but lost.

Chung’s lopsided victory left many within the party speculating that it was representative of the growing discontent among Saenuri lawmakers over what it perceives is the Blue House’s unilateral way of carrying out policy directives, with the presidential office often neglecting to seek cooperation from the ruling party.

The growing possibility of losing key races in the June 4 local elections in the aftermath of the Sewol ferry crisis was also attributed to Hwang’s overwhelming defeat. Some said the vote was a sort of protest over the way Hwang led the party: the five-term lawmaker was said to have been too passive in following the president’s initiatives without raising any objections.

“Chung’s election represents an outpouring of demand by party members for a fundamental reform in the party system,” said Saenuri Representative Kim Yong-tae, who added that the party fell far short in making its demands heard by the Blue House. “The party just looked at Park [waiting] for her command.”

Sensing some party members’ disenchantment with Hwang, conservative lawmakers close to the president rushed to muster support for the former Saenuri chairman, though their efforts turned out to be futile.

“The Blue House must understand the extent of the discontent among Saenuri lawmakers [over the way the presidential office is handling the Blue House-Saenuri relationship],” said a ruling party lawmaker who spoke on the condition of anonymity.