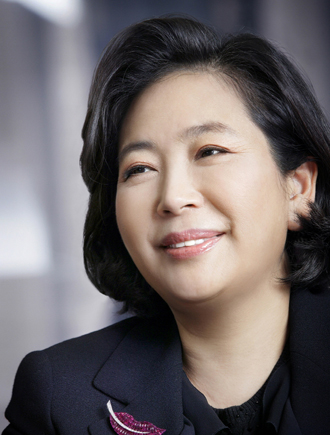 Hyundai Group Chairwoman Hyun Jeong-eun urged Hyundai Elevator to become the “only one” in the global elevator industry as the nation’s largest elevator manufacturer celebrated its 30th anniversary.

Hyundai Elevator held a ceremony last Friday with some 600 employees at its headquarters in Icheon, Gyeonggi. It also released a history of the company that tells its 30-year story.

The company has been the No. 1 player in Korea for the last seven years, taking nearly half of the market share. It earned a revenue of 1.06 trillion won ($1 billion) last year, surpassing the 1 trillion won milestone for the first time after installing more than 15,000 elevators. In its debut year, the company earned 1.6 billion won in revenue and installed only 400 elevators.

“Hyundai Elevator already ranks with the world’s top-class companies in technology,” said Hyun at the ceremony. “Through three production points that link Korea, China and Brazil, let’s begin a new challenge, which is to become ‘the only one’ beyond being ‘the best one.’”

Hyun credited the growth of the company to Hyundai’s “spirit,” which was inspired by the late Hyundai Group founder Chung Ju-yung and her husband Chung Mong-hun. Hyun became chief of the conglomerate in 2003 after her husband died.

“I hope Hyundai Elevator will become a company that can last more than 100 years,” she said.

Hyundai Elevator has been trying to explore overseas markets in recent years. In February, the company announced that it had secured a 100 percent stake in Shanghai Hyundai Elevator to expand its presence in the world’s biggest elevator market.

It completed construction of a plant last month in Sao Leopoldo in Brazil’s Rio Grande do Sul state. The Brazilian plant can build 3,000 elevators a year for the South American market.

The company recently secured orders for elevators for apartments used for the 2016 Olympics in Rio de Janeiro and is negotiating to supply elevators to a Trump Tower in Rio and the Visionaire shopping mall in Brasilia.