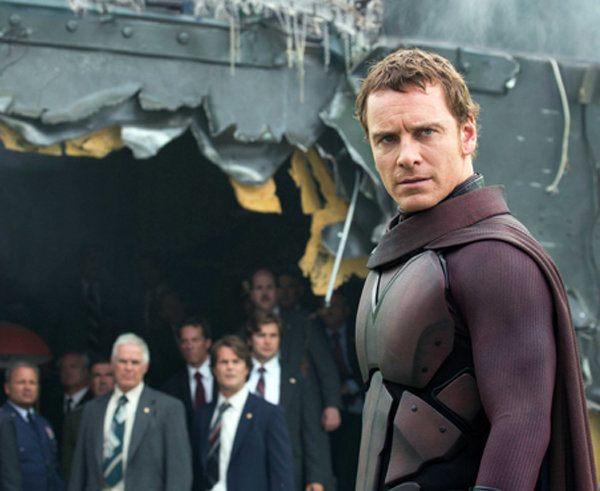 Michael Fassbender in the film “X-Men: Days of Future Past.” [AP/NEWSIS]

SEOUL, LOS ANGELES - The mutant superheroes once again proved that they are Korea’s most beloved film characters during the weekend.

According to the Korean Film Council yesterday, Fox-Marvel’s “X-Men: Days of Future Past” debuted with 14 billion won ($14 million), beating last weekend’s No. 1 hit romance “Obsessed,” which stars actor Song Seung-heon as a general during the Vietnam War in the late 1960s.

Over the weekend, “Days of Future Past” garnered 1,451,600 admissions. It also topped the North American box office, earning $41.4 million in ticket sales. The film is estimated to earn nearly $110 million over the four-day extended U.S. holiday weekend, which would make it the fifth-highest Memorial Day opener just after last year’s $117 million-grossing “Fast & Furious 6.” “Pirates of the Caribbean: At World’s End” holds the highest Memorial holiday debut ever with $140 million in 2007.

“Days of Future Past” is the second-highest opener in the “X-Men” franchise after Brett Ratner’s “X-Men: The Last Stand” debuted over Memorial Day weekend with $123 million in 2006.

Meanwhile, director Kim Dae-woo’s “Obsessed” earned another 231,510 viewers at the Korean box office. The film passed a total of one million admissions within 10 days of its release, which Industry insiders see as a breakthrough because the film can only draw adult audiences after it was rated “R” by the Korea Media Rating Board.

Last week’s No. 4 thriller “The Target” leaped up a level with 116,079 viewers from 716 screens nationwide. As of Sunday, it lured more than 2.7 million viewers and made 21 billion won.

As “The Target” was screened during the 67th Cannes International Film Festival last week, local filmgoers once again tried the film out at the cinema. Based on the French film “Point Blank,” the story follows actor Ryu Seung-ryong in the 36 hours he is given to track down the real culprit after being accused in a murder case.

Trailing behind by a thin margin was sci-fi action drama “Transcendence” with 113,066. Although Johnny Depp has been Korea’s most-wanted Hollywood figure over the past decades, his new film doesn’t seem to be appealing to fans here. The movie, directed by Wally Pfister, has won a total of 644,329 viewers, or 5 billion won, in Korea.

At the North American box office, it has garnered 438,487 admissions over the weekend, with $31.4 million, according to studio estimates Sunday.

Director Lee Jae-kyu’s historical film “The Fatal Encounter” only marked No. 6 with 66,658 viewers, surprising media insiders that estimated the film would be as successful as other historical films like “Masquerade” (2012) or “The Face Reader” (2013).

Lee’s film, which had about 10 billion won invested in it, which is considered a high amount for a Korean film, only managed to garner total admissions of 3.8 million. Since its release on April 30, the film has earned 29 billion won.

Director July Jung’s independent film “A Girl at My Door,” which also screened at Cannes last week, debuted as No. 7 with 55,868 viewers.

Filmmaker Spike Jonze of the 1999 film “Being John Malkovich” secured the No. 8 spot on the charts with his drama “Her,” led by Joaquin Phoenix. The film has won 46,818 viewers from 167 screens nationwide, according to the Korean Film Council.