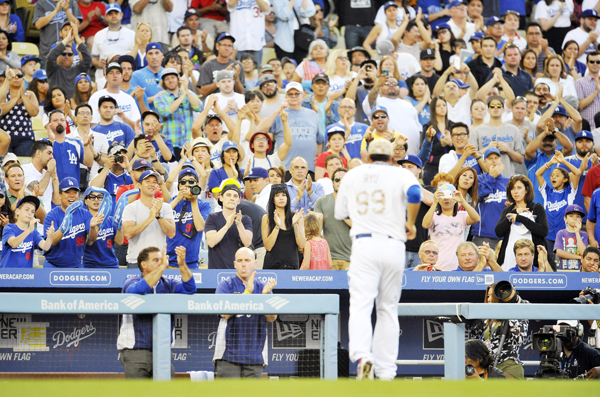 Dodgers fans rise to their feet to applaud Ryu Hyun-Jin as he leaves the game in the eighth inning on Monday local time. Ryu pitched seven perfect innings against the Cincinnati Reds in a 4-3 victory. [USA TODAY/NEWS1]

Ryu Hyun-jin came within six outs of becoming the first Asian pitcher to throw a perfect game in the history of Major League Baseball.

But after giving up three hits in the eighth inning and a shaky performance by reliever Brian Wilson, the Los Angeles Dodgers left-hander was happy to settle for his fifth win of the season in a 4-3 victory over the Cincinnati Reds.

Ryu retired the first 21 hitters he faced, striking out seven, on Monday local time as anticipation grew in the crowd of 45,000. Just a day earlier, Josh Beckett had thrown a no-hitter against the Phillies at Citizens Bank Park in Philadelphia.

When the Dodgers were batting, Ryu’s teammates let him sit alone in the dugout in line with baseball tradition.

But it all ended in the eighth inning, when the Reds’ Todd Frazier led off with a double.

Beckett’s no-hitter was the first by a Dodgers pitcher since Hideo Nomo of Japan did it against the Colorado Rockies in 1996, becoming the first and only Asian pitcher to accomplish the feat. Nomo had another no-hitter with the Boston Red Sox against the Baltimore Orioles in 2001.

Sandy Koufax was the last Dodger pitcher to throw a perfect game in 1965.

“I started thinking about it from the seventh inning because I hadn’t allowed a hit or a walk, which doesn’t happen a lot,” said Ryu. “Manager Don Mattingly, pitching coach Rick Honeycutt and I joked about making a perfect game on our return flight from Philadelphia, but we never knew that I would be so close [laughs].”

Even though left-handed batters are hitting .333 against Ryu, the Reds started the game with eight righties and switch-hitter Billy Hamilton. Right-handed hitters were .232 against Ryu on the season prior to the game.

Instead of throwing his slider, which has been an effective third pitch after his changeup, Ryu used more slow curves on the outside corner of the plate that were made all the more effective by fastballs that reached 95 miles per hour. According to MLB.com, Ryu’s fastballs averaged 92.7 miles per hour against the Reds, the fastest since last year’s 92.3 miles per hour on July 28, also against Cincinnati.

“I think that speed came out because I’m healthier than previous games,” Ryu said. “I didn’t know that curveballs would work well like tonight, but catcher [Drew] Butera asked me to throw a lot of them, so I just followed his lead. Overall, my control and speed were good, but only until the seventh inning. I’m a little disappointed that I allowed those additional hits after the first one to Frazier.”

Ryu also threw only 32 pitches in the first three innings, while striking out three, then 24 in the next two innings.

In the bottom of the seventh, with runners on second and third and one out, the Dodgers scored their second run when shortstop Zack Cozart failed to cleanly handle a grounder by Ryu, causing Justin Turner to score from third. Carl Crawford then doubled home Ryu and Dee Gordon.

After running the bases, Ryu looked like he was starting to tire in the top of the eighth, with his fastball slowing to an average of 91.5 miles per hour.

Frazier started the inning with a solid double to left field, smashing Ryu’s dream of a perfect game and a no-hitter. Ryu then lost his shutout when Ryan Ludwick singled and Chris Heisey hit a sacrifice fly to score Frazier.

After allowing another single to Brayan Pena, Ryu was replaced with setup man Brian Wilson.

As Ryu walked to the dugout, Dodger fans - including thousands of Koreans - gave him a standing ovation.

Ryu seemed a bit disappointed with himself as he threw his glove toward the back wall of the bench after being greeted by his teammates.

Wilson proceeded to walk pinch hitter Skip Schumaker and serve up a double to Billy Hamilton to score two more runs, both of which were charged to Ryu.

That ended Wilson’s day and closer Kenley Jansen was brought in to get the third out in the eighth and pitch the ninth for his 15th save. It was his first four-out save in 289 days.