Who is afraid of the people?

Who is afraid of the people? 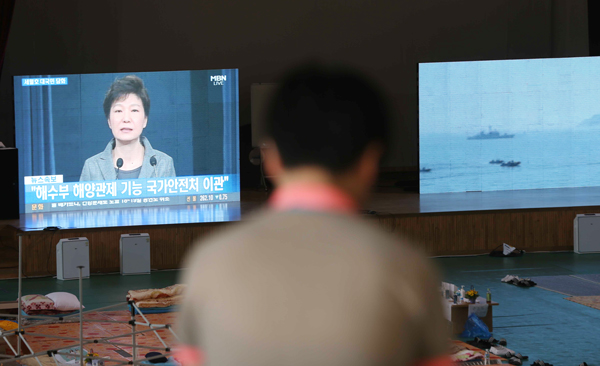 A relative of a student missing in the sinking of the Sewol watches President Park Geun-hye apologize for the disaster in a televised speech last week. [JoongAng Ilbo]

As the president read her statement to the nation about the tragic sinking of the Sewol, she sounded fierce. We had expected she would express a fury she had contained for 33 days. The Coast Guard, which became the center of criticism in the aftermath of the tragedy, was dissolved. The bureaucrats who are supposed to be responsible for the citizens of the nation were accused of having a mafia mentality by their own leader. Park risked being tarnished with the same stain if she didn’t take on the “bureaucratic mafia.” The state public service examination, which has produced the ruling elite of modern Korea, is about to be overhauled. The president promised to rebuild the nation with a new national safety agency and an anti-corruption act. And she shed tears as she read the names of the teachers who died along with their students in the Sewol ferry tragedy.

Park’s first tears made us all solemn. But it didn’t take long for the solemnity to disappear. Why weren’t the people more impressed? Why did her pledge to rebuild the nation fail to resonate with the people? I know I am not the only one who feels so untouched. After her tearful address, the ruling party’s plummeting approval rating didn’t bounce back. When people are in deep grief, their judgment can be sharper than ever.

The people expected Park to explain how the government is prepared to prevent such awful tragedies in the future. Koreans feel dispirited and lost with the incompetence of the state so nakedly revealed, and we have been waiting to see how the president would deal with our frustration and disappointment. The people came to realized that the entity that will rebuild a collapsed public system is not the state - how can it rebuild itself? - but a greater mass called a civil society.

In the president’s address, however, the citizens and the civil society were neither summoned nor rallied nor appealed to. They were nothing but bystanders.

In the rebuilding of a system that has lost the people’s faith, the first and foremost task is to provide assistance to the families of the victims. Danwon High School and its surrounding region suffered the loss of hundreds of students and the victims’ families are obviously devastated. Their economic activities are seriously affected and their psychological trauma will last for years to come. The system must promise economic assistance and psychological therapy for the next few years. What the families wish for is not a pledge to punish the greedy Yoo Byung-eun family or to offer them maximum compensation, but a promise that the nation will support and assist them.

The people are not sure whether the president’s proposal of a 27-point national reform is appropriate and are skeptical that the government can lead its own reform. Past experience has taught us that the idea of politicians reforming politics and clean officials punishing corrupt officials is nothing but hot air. Why isn’t the president asking the people to help? Why is she not asking our civil society how the government can recover trust? Why are the police watching victims’ families to see if they are contacting groups with shady motives? Will arresting protesters end protests? Did the administration secretly seek cooperation with broadcasters to sway public sentiment? Or is it just waiting for the World Cup to lighten the national mood?

It is an outdated idea of the politicians that only they can resolve the difficulties of an incompetent state. The National Assembly wasted all of 2013 fighting over petty political interests and it is completely shameless for it to suddenly declare it wants a parliamentary probe into the administration and how it handled the Sewol ferry tragedy. That’s the last thing Korea needs.

Just as the National Assembly is considering including the Blue House in the probe, civil society needs to scrutinize the National Assembly. The president unilaterally makes orders and officials take the orders without asking questions. The ruling party idly watches the dynamics and the opposition protests in and outside the National Assembly. Minor parties use the niche strategy of being pro-Pyongyang. It is a kind of collusion to rejoice over the wrangling involved in national reform as the election is approaching. The opposition party leader said, “The tears are too late, and the plans are too early.” The people know that the opposition will reject the ruling party’s moves without offering any alternatives. That’s what the parties always do.

However, people may be at least a little consoled that lawmakers will be replaced by other lawmakers, and generals will be replaced by other generals. Time does offer us that small satisfaction. The past month of sorrow has shown that the civil awareness in Korea is far more mature than the politicians realize. The real culprit of the Sewol ferry disaster is revealing a democracy that thinks it can function without its own people.