The value of a good public authority

The value of a good public authority 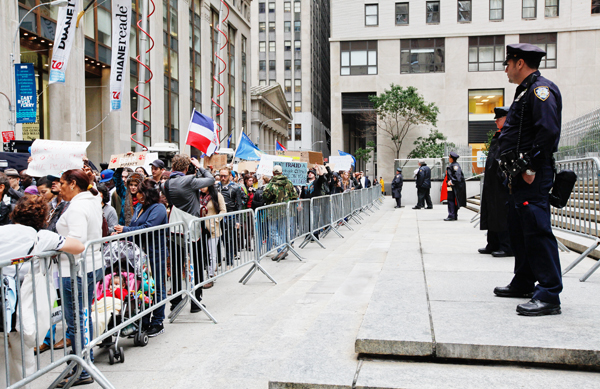 In Korea, drivers often get into arguments with traffic cops. Not many drivers admit their faults when they are caught for violating a signal or running the speed limit. I, too, resisted the traffic cops. However, if you do the same in the United States, you can get in big trouble. Korean correspondents in Washington share an urban legend: a Korean driver was caught for violating a signal, and he started an argument with the traffic cop just as he would in Korea. Then, the cop peeked into the car and issued seven tickets, including a seat belt violation, a stop-light violation and obstruction of justice. The fines added up to more than $1,000.

In the United States, protesters must follow the rules strictly as well. The police line is not a mere line. It distinguishes what’s lawful and what’s not.

The Occupy Wall Street protest began in New York in the summer of 2011 and stirred American society for 73 days. When the protest spread to Washington, a Korean police executive visited the site and was deeply impressed. There were about 200 protesters, and one police officer was in charge of keeping them in order. But when the protesters approached the police line, he sounded a siren and warned, “If you take one step further from where you are now, your protest will become illegal.”

The demonstrators stepped back at once. The Korean police executive said that it would take as many riot police to push back 200 protesters in Seoul. Americans have trust in public authority, which is strict on both the powerful and the weak.

What divided barbarism and civilization in the Sewol ferry accident was how the captain and crew members acted. The folly Korea’s public authorities staged in the aftermath illustrated the difference between advancement and backwardness. They announced the raid on Geumsuwon, the Salvation Sect compound, four days before the arrest warrant, giving Yoo Byung-eun, the shadowy business tycoon behind the Sewol ferry’s operator, plenty of time to flee. As expected, he is still at large.

The public authority that is weak to the powerful and mighty to the weak is no longer functional. When Korean independence fighters were battling against imperial Japan and democratic activists opposed dictatorship, the public authority was the evil. Therefore, it was right to resist. That’s why many Koreans still speak up against traffic police.

However, the link must be severed there. In a normal democratic nation, public authority is the apparatus that maintains society and protects the people. Public authority that is firm on the strong and stern on the weak is a good that should not be ignored. The national reform plan must include the revival of a good public authority.

*The author is the JoongAng Ilbo Washington bureau chief.