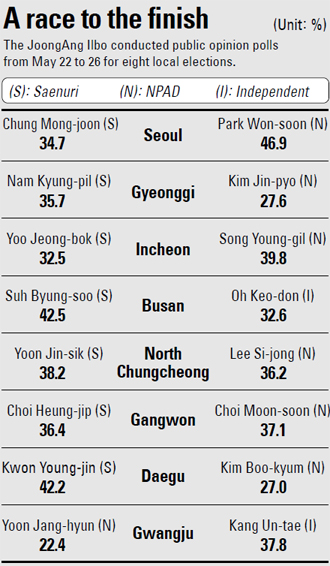 With just a week before the local elections, the ruling Saenuri Party is leading in eight races, while the opposition New Politics Alliance for Democracy (NPAD) is ahead in five, according to the results of a recent poll.

Among the 17 metropolitan and provincial contests, the candidates in the North Chungcheong and Gangwon gubernatorial races and Sejong mayoral election are running neck and neck, according to a four-day survey conducted by the JoongAng Ilbo from Thursday to Monday.

An independent is forecast to win in the Gwangju mayoral poll.

The JoongAng Ilbo produced its forecast today by combining the outcome of its poll with the results of other surveys conducted by different research firms.

If the forecast turns out to represent true outcomes at the ballot box, the three most highly contested races will determine which party will dominate on June 4.

In the Seoul mayoral election, the most closely watched race in the polls, NPAD contender Park Won-soon maintained a comfortable lead over the Saenuri’s Chung Mong-joon with 46.9 percent to Chung’s 34.7 percent - a 12.2 percent gap.

The survey polled a thousand Seoul residents and has a margin of error of plus or minus 3.1 percentage points.

In the Gyeonggi gubernatorial election, which also has high political stakes, ruling party candidate Nam Kyung-pil was leading with 35.7 percent to the NPAD candidate Kim Jin-pyo’s 27.6 percent, an 8.1 percent gap, down only 0.4 percent from a previous poll on May 21.

In the Busan and Daegu mayoral elections, in which the opposition is hoping for an upset, the Saenuri still maintains leads in its traditional strongholds.

In Daegu, Saenuri candidate Kwon Young-jin was ahead with 42.2 percent to NPAD candidate Kim Boo-kyum’s 27.0 percent, a figure that would certainly disappoint the opposition, which is hoping to produce a liberal mayor in the city for the first time.

Oh Keo-don, an independent from the liberal bloc running in the Busan mayoral race, had 32.6 percent, trailing the Saenuri’s Suh Byung-soo, who received 42.5 percent, by nearly 10 percentage points.

The latest figure is a stark turnaround from a previous poll conducted May 20 that showed the two running in tandem.

The poll also shows the two Saenuri candidates in the North and South Gyeongsang gubernatorial elections with a comfortable lead over their NPAD challengers.

The Gyeongsang region is a traditional support base for the ruling party, while the Jeolla region is a typical liberal base.

Two NPAD candidates in the North and South Jeolla gubernatorial elections are certain to win provincial seats on June 4.

In the Incheon mayoral election, in which Yoo Jeong-bok - a longtime aid to President Park Geun-hye who left his ministerial post to run - is competing with NPAD incumbent Mayor Song Young-gil, Song is leading with 39.8 percent to Yoo’s 32.5 percent.

Under the national election law, the outcome of any polls conducted from Thursday will be banned from being made public.