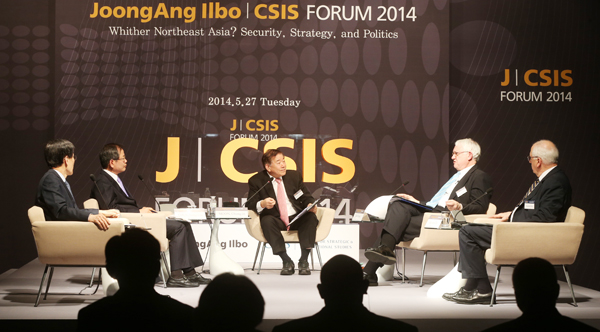 The U.S. policy of “pivoting” to Asia, which comes in the midst of the rise of China and ongoing regional tensions, is expected to extend to future administrations because of bipartisan support in the United States, according to experts at the fourth JoongAng Ilbo-CSIS Forum, which kicked off yesterday at the Westin Chosun Hotel in central Seoul.

A group of 250 leading experts in foreign affairs and security issues, scholars, diplomats and Korean university students gathered to evaluate and analyze key issues pertaining to the Korean Peninsula and its relationship with neighboring countries and the United States.

The annual forum, supported by the Washington-based policy think tank Center for Strategic and International Studies (CSIS) and the JoongAng Ilbo, first launched in 2011 to discuss key issues in the Northeast Asia region.

Hong Seok-hyun, chairman of the JoongAng Ilbo and JTBC, said in opening remarks that while next year will mark the 70th anniversary of the Korean Peninsula’s division, “the structure of confrontation between the nations has not been resolved. Regrettably, the international regime preventing the advancement of North Korea’s nuclear capacity has stopped functioning.”

Hong described a complicated state of affairs in East Asia, including the Japanese government’s push for a right to collective self-defense by reinterpreting its Constitution while advocating historical revisionism, China’s establishment of an air-defense identification zone (ADIZ) in the East China Sea, and a widening confrontational relationship between China and Japan.

“As East Asia is caught up in a vicious cycle of distrust and confrontation,” Hong added, “America’s role as a balancer is more crucial than ever. In this sense, I believe the Obama administration’s ‘pivot to Asia’ policy has been put to the test.”

In an afternoon panel on the U.S. pivot, or rebalancing, to Asia, Kurt Campbell, a former assistant secretary of state for East Asian and Pacific affairs and chairman and CEO of The Asia Group, pointed out that U.S. strategy on Asia has been roughly divided into two schools of thought over the past 30 years or so.

The first group, often operating out of the White House, holds the idea that at the center of U.S. strategy is China and has the perspective that “if you can get China right, the rest will follow naturally.” The other group is the so-called alliances first school of thought, which emphasizes stronger relations with U.S. allies such as Japan, South Korea and Australia to manage issues such as China and the instability in North Korea.

“The primary focus on American strategy in Asia has been Northeast Asia,” Campbell said. The U.S. has to try to focus more attention on Southeast Asia in terms of its rebalancing to Asia, he said.

Part of a more comprehensive strategy for the rebalancing effort includes successfully concluding the Trans-Pacific Partnership trade pact, engaging in multilateral engagement, enabling defense reorientation in the region from Northeast Asia to other parts and involving Europe and India, he said.

“We need to engage China and find the appropriate balance between dealing with the hard issues such as cyber security and maritime issues,” said Campbell. “U.S. and China need to find a way to live together. The idea that this is a containment strategy is far-fetched and ludicrous.”

Michael Green, senior vice president for Asia and Japan chair of CSIS, pointed out that in a survey conducted by the center asking countries whether they supported the Obama administration’s pivot to Asia, 95 percent of Americans said they did.

Green said this policy of rebalancing toward Asia “will definitely continue because it has bipartisan support.”

“Korea is absolutely pivotal because it can enjoy an economic relationship with China but absolutely stand by democratic values,” said Green.

The forum was divided into three sessions on China’s changing policy toward North Korea, Korea-Japan relations and the U.S. pivot to Asia, as well as a discussion period with the audience, including students from schools such as Seoul National University and Yonsei University.

Denuclearization of North Korea was another key issues discussed by the experts, who weighed in on China’s responsibility for keeping Pyongyang in check.

“Some Americans doubt that China is seriously committed to denuclearization. They are wrong,” said J. Stapleton Roy, a former U.S. diplomat and founding director emeritus of the Kissinger Institute on China and the United States at the Woodrow Wilson International Center for Scholars, as he described the underlying reasons why China is resolute in its opposition to North Koreans’ nuclear weapons.

“First, [China] estimates that a nuclear North Korea will increase the likelihood that Japan will develop nuclear weapons sooner or later. Second, they believe that the U.S., South Korea and Japan would take security counter-measures that are damaging to China.”

The U.S. experts generally agreed that Japan and South Korea needed to work toward improving bilateral issues for the benefit of the region. They also agreed that some issues - such as that of the Japanese military’s mobilization of girls and women from Korea and other Asian countries into sexual slavery before and during World War II - should be resolved.

“In my view, when [Chairman Katsuto] Momii of NHK made his terrible comments, it was not sufficient for the Abe government to say it was his individual comments,” said Armitage, also a veteran U.S. diplomat. He added that the Shinzo Abe administration should have clearly emphasized that this was not the position of the Japanese government. He was referring to the chairman of Japanese broadcaster NHK’s comments in January that the so-called comfort women system “could be found in any nation that was at war.”

“The comfort women issue needs to be resolved in a relatively timely manner,” said Armitage. “Korea is going to have to be wise enough to realize when Japan is serious.”