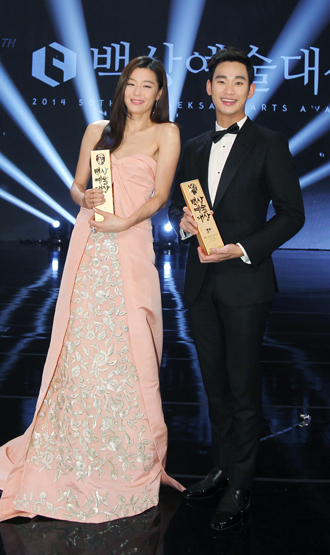 Kim Soo-hyun and Jun Ji-hyun from the popular drama “My Love From the Star” were singled out as victors among victors at the 50th LF Baeksang Arts Awards, which gave props to entertainers from TV and film.

The event that took place Tuesday night at Kyung Hee University, central Seoul, was hosted by Ilgan Sports and emceed by Shin Dong-yup and Kim Ah-joong.

As the craze for “My Love From the Star” soldiers on, Jun was given the Grand Prize for her role as ditzy yet lovable diva Chun Song-yi, the character she played opposite Hallyu heartthrob Kim.

Kim himself took home three awards: the Male Popularity Award for “My Love,” along with the Newbie Actor Award and Popular Actor Award for his part in the film “Secretly, Greatly.”

The banter between Jun and Kim as they accepted their awards had fans in stitches. While on stage to collect her award, Jun said she was “grateful to Do Min-joon [an ancient alien in the drama] for staying behind on this planet, and also to Kim Soo-hyun.”

She also thanked those who watched the drama and said it was wonderful to have her hard work and passion for the project recognized.

“While filming, I always thought this may be the last chance I get to do this, and it feels like my sentiments were felt by the viewers,” said Jun.

Jun also said to Kim, “Let’s do it again,” hinting that this may not be the last time the two work on a project.

Kim then expressed his thanks to the staff that worked on the hit SBS show, as well as to viewers worldwide, and signed off with “Chun Song-yi, I love you.”

But he also professed his love for actress Jeon Do-yeon, when asked by Shin who he thought was more his type - Jeon or Jun.

Kim joked, “Because she [Jun] just left, I have to say Jeon Do-yeon.”

Another winner of the night was Song Kang-ho, who took home the Grand Prize in the film category for “The Attorney.” The film also picked up Best Work.

In the TV category, reality program “Grandpas Over Flowers” gained an award, and both Park Shin-hye and Shin Dong-yup were recognized for their roles in “The Heirs” and “Witchhunt,” respectively.”

In the film category, Bong Joon-ho nabbed best director for “Snowpiercer,” while best newcomer director went to Yan Woo-suk for “The Attorney.”