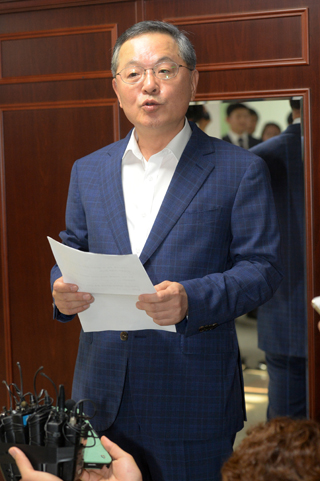 
After being accused of making a fortune in five months after retiring from the Supreme Court and possibly breaching ethical standards, Ahn Dae-hee withdrew from his nomination as prime minister, striking a blow at President Park Geun-hye’s effort to clean up the government after the Sewol ferry tragedy in April.

“I intend to withdraw my nomination for Prime Minister today,” said a grim-looking Ahn at a 5:00 p.m. press conference yesterday. “I am very sorry for having disappointed the people over a series of suspicions about collusive ties (between the private and public sector).”

“It is also overbearing for me to watch the suffering of my family, who have given me strength, and clients who entrusted me to represent them (in court),” Ahn said. “I wish to return to life as an ordinary citizen.”