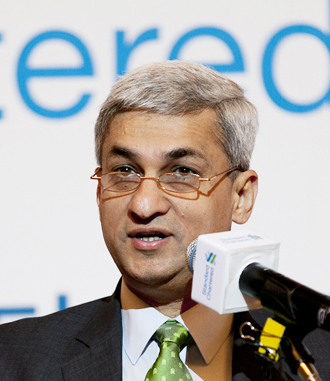 Ajay Kanwal, the new CEO of Standard Chartered Korea, said yesterday he will seek growth at the Korea headquarters using his knowledge of consumer banking and by developing a model of digital banking that fits Korean customers’ needs.

The Indian-born chief, who has worked in several key posts of Standard Chartered Bank in Asian countries, said at his first press conference held at a hotel in central Seoul yesterday that he will focus on growth and dismissed possibilities of pulling out of the market.

“We are here to grow,” Kanwal said. “We plan to increase the number of customers from the current 4 million to 5 or 6 million, and will keep making investments.”

The new CEO of one of three struggling foreign-based banks in the country said that of the three banks, SC made the largest investment of 4.7 trillion won ($4.6 billion) last year.

With regard to the bank’s falling profitability, Kanwal acknowledged that the overall banking industry is facing difficulties, largely due to the low interest rate, but he said he is confident that the Korea branch can improve next year by using resources it already has - more than 4 million customers, a global network and extensive knowledge of wealth management.

“I will not focus on quarter-on-quarter assessment,” Kanwal said. “To run a business, it is more important to have a long-term perspective.”

Kanwal took office in April, abruptly replacing Richard Hill, who had two years left in his term. The move was made due to the bank’s poor performance and conflicts with labor unions.

He was also appointed regional CEO for Northeast Asia in charge of operations in Korea, Japan and Mongolia. Starting in April, SC Korea has been designated as the headquarters of the bank’s Northeast Asia operations, indicating that the group is taking into consideration the significance of the Korean market.

For the past 20 years, Kanwal led strategy development for retail banking in countries including Singapore, Malaysia, Indonesia, Thailand and Vietnam.

The London-based financial group will consolidate 50 branches in the country with nearby branches by the end of this year. Kanwal stressed that the number will not exceed 50, and that all employees understand the plan. He also dismissed rumors of workforce restructuring.