Waterloo for the Williamses in France

Waterloo for the Williamses in France 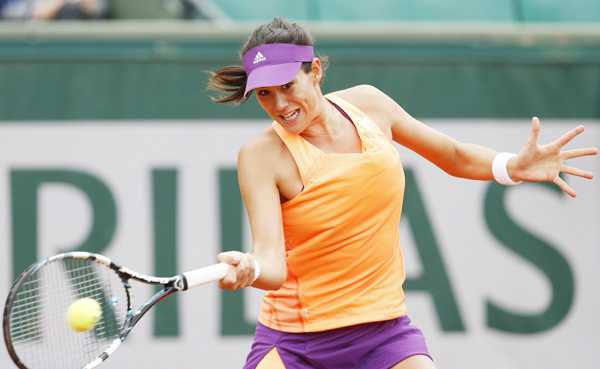 Spain’s Garbine Muguruza hits a return against Serena Williams of the United States during their second-round match Wednesday at the French Open at Roland Garros Stadium in Paris.[AP/NEWSIS]

It was meant to be a grown-up event for the Williams family at the French Open, but now it will be more of a kids’ party after two youngsters showed the American sisters to the door on Wednesday.

“I think this year there are a lot of young girls who are playing really good. I think [this] is a change now in the top 100, a lot of girls are coming,” said Muguruza, 20.

“These things are going to happen sometime, a new generation is going to come, and I think now is the moment.”

On Tuesday, the 21-year-old Kristina Mladenovic of France confirmed that impression when she beat Australian Open champion and second seed Li Na.

But the youngsters still have a way to go - Maria Sharapova is the last under-20 to win a major tournament, the 2006 U.S. Open.

Iva Majoli, Martina Hingis and Monica Seles claimed grand slam titles as teenagers in the 1990s, while Serena won her first major (the U.S. Open in 1999) as a teenager.

“I guess it takes younger people longer to develop. Maybe they don’t get to play as much,” said Venus. “Things have changed, but there is still a lot of great talent out there, that’s definitely for sure.”

It might take some more time before the new generation shuts the door in the face of the 30-somethings, according to Serena.

“When I got close to 30, I felt like I didn’t want to stop. I just wanted to keep going,” the 32-year-old said. “Also, technology has changed. Training has changed. People’s bodies are better. So maybe that has something to do with it, as well.”

Under gray skies on court Philippe Chatrier, Venus, the 29th seed, got off to a solid start, winning four games in a row to take the opening set.

Schmiedlova, the world No. 56, stepped up a gear and, after an early exchange of breaks, stole the nine-time grand slam champion’s serve in the seventh game of the second set and evened the contest when her opponent netted a forehand.

The 19-year-old pulled through for the biggest win of her life thanks to a series of brilliant passing shots.

On court Suzanne Lenglen, world No. 35 Muguruza showed little deference to Serena, her childhood hero, sweeping her aside in 64 minutes.

“She said that if I continue playing like this, I can win the tournament. I said, I will try, I will try,” said Muguruza.