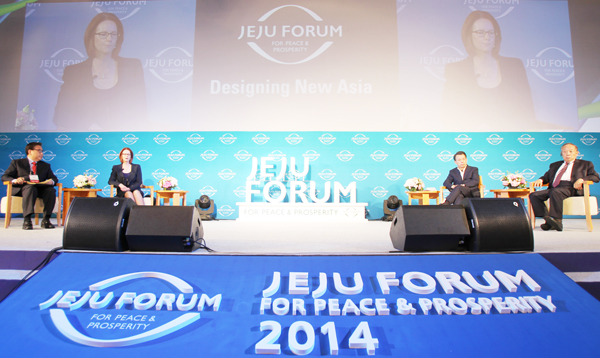 Panelists discuss the subject of “designing new Asia” yesterday at a session of the Jeju Forum for Peace and Prosperity at the Haevichi Hotel, Jeju. [NEWSIS]

JEJU – Veteran Asian leaders yesterday described their vision of the continent in the future and discussed evolving foreign relations among Asian countries at the Jeju Forum for Peace and Prosperity.

Gillard, who currently serves as chair of the Global Partnership for Education, outlined three factors that will play a key role in reshaping the future of Asia: threats posed by North Korea, the consequences of China’s rise and the engagement of the United States in Asia.

“North Korea continues to oppress its own people and cause international concern because of its unpredictability and ambition for nuclear weapons,” she said. 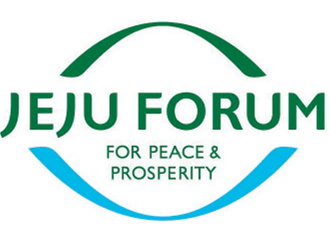 “We do not know the limits of what he is capable of doing, from brutalizing his own people to murdering his opponents to developing nuclear weapons,” she said.

As for the rise of China, Gillard pointed out multifaceted aspects.

However, she also cited anti-China riots in Vietnam and anxiety over the South China Sea as evidence of tensions associated with the rise of China. In turn, former Foreign Minister of China Li Zhaoxing stressed that China’s emergence as a stronger country would not pose threats, posing contrasts and comparisons with Western countries.

“Britain took over Hong Kong and Japan took away Taiwan from China,” Li said. “But China is different. We will develop gradually and peacefully. China’s development is beneficial for other countries and does not take away from other countries’ interests,” Li said.

Li said that tensions between countries might happen from time to time, but in order to resolve regional issues, outside countries should not interfere, apparently referring to the United States.

The former foreign minister also took a swipe at the foreign policy of the United States, which is supposedly refocusing on the Asian region.

“I think that America’s foreign policy - namely its pivot, or rebalancing, to Asia - is rather vague and can be translated into a threat to each country’s sovereignty,” he said.

In the opening remarks, Gillard emphasized diplomatic relations between Australia and Korea that spanned more than 50 years.

“We have deep and rich ties. As prime minister, I visited Korea three times, including in 2011 to mark the 50th anniversary of diplomatic ties between the Republic of Korea and Australia,” she said.

Gillard recalled when she visited Korea to mark the 60th anniversary of the battle of Kapyong, in which hundreds of Australian troops were killed. The former prime minister was accompanied by war veterans during a visit to Kapyong. “Eighteen-thousand Australian troops served here, and 340 Australians died here [in the battle],” said Gillard. She went on to take note of the active trade between the two countries. “South Korea is our third-largest export market and is our fourth-largest trading partner,” she continued, “with two-way trade of approximately $30 billion per year - we have just concluded a landmark free trade agreement that slashes tariffs.”

In addition to the opening session, other panel discussions were held.

The topics varied from North Korea to e-government to gender equality. One of the most popular sessions was on North Korea and Northeast Asia chaired by Kim Young-hie, editor at large of the JoongAng Ilbo, with presenters from the Blue House, China’s Renmin University and Japan’s Keio University. Professor Jin Canrong made the point that it’s important for Seoul “to build good relations both with China and the United States.”Representing Japan, Professor Soeya Yoshihide noted the importance of Korea to Japan.

In another session arranged by the United Nations Project Office on Governance (UNPOG), a panel discussed Korea’s e-government system.