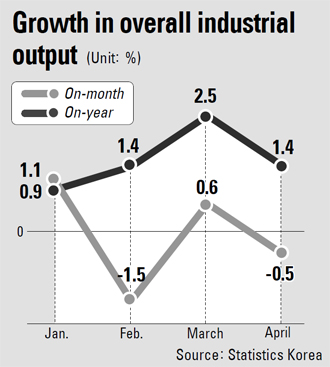 A government report offers more evidence that the Sewol ferry tragedy had a negative effect on the national economy in April.

According to Statistics Korea yesterday, overall industrial output dipped 0.5 percent last month compared to March due to lower services and retail spending in the wake of the ferry sinking.

But compared to the same month last year, total production was 1.4 percent higher.

Despite slight increases in the mining, manufacturing and construction industries, the overall economy was swayed by falls in the service and retail sectors that are sensitive to consumer sentiment.

The report said the output of arts, sports and leisure businesses contracted 11.6 percent, while the food and accommodation industries dwindled 3.2 percent.

“Although the service industry was directly affected by the ferry disaster, the manufacturing sector kept its growth pace and facility investment showed great improvement,” said the ministry in the report. “The accident’s impact is not spreading across all parts of the economy.”