Malkovich back on TV as historic pirate Blackbeard

Malkovich back on TV as historic pirate Blackbeard 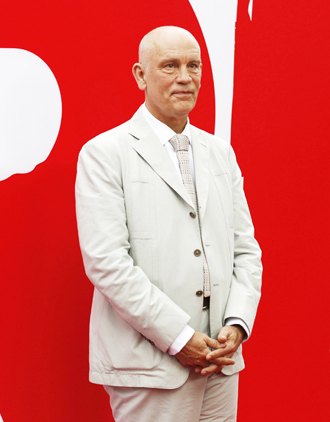 Cast member John Malkovich poses at the premiere of the film “Red 2” in Los Angeles, California, in this July 11, 2013, file photo. Emmy-winner Malkovich returns to U.S. television May 30, 2014 as the swashbuckling 18th-century pirate Blackbeard, ruling over a secret Caribbean island while outwitting and eluding the British, in the new NBC drama “Crossbones.”[REUTERS/NEWS1]

The adventure series that premieres on Friday is a reimagining of the story of the notorious English buccaneer, named for his dark biblical beard and fierce appearance, who terrorized the seas and plundered ships.

Blackbeard was killed in 1718, but in “Crossbones,” written by award-winning writer Neil Cross, who created the British crime drama “Luther,” he is still alive years later and determined to get his hands on the newly invented longitude chronometer, a navigational device for ships.

Menacing characters are familiar territory for the actor, who was nominated for an Oscar in 1994 for his role as the psychotic assassin in the film, “In the Line of Fire,” and won acclaim as the evil Colonel Walter Kurtz in the television adaptation of Joseph Conrad’s “Heart of Darkness.”

He also earned an Emmy in 1986, playing Dustin Hoffman’s son Biff in the TV movie of Arthur Miller’s “Death of a Salesman.” Malkovich signed onto “Crossbones,” which was shot entirely on location in Puerto Rico, after reading the script for the first episode.

“I thought it was an excellent piece of writing,” he said about the series.

Blackbeard’s band of marauders nearly steal the chronometer during an attack on an English ship, but their efforts are thwarted by spy Tom Lowe, played by British actor Richard Coyle (“Prince of Persia: The Sands of Time”), who poses as the ship’s surgeon.

Lowe destroys the prized instrument but memorizes its code and is taken prisoner to the secret island of Santa Compana, where he must find a way to reassemble it to save his life.

While the English try to track down Blackbeard, Lowe attempts to outwit the scheming pirate, gain his trust and find an opportunity to kill him.

“A decent part of the series has to do with how he does or doesn’t do that and why. That is the main relationship,” said Malkovich.

As the two men battle with and against each other the line between friend and foe is blurred.

“In a certain way Blackbeard might be a better friend to him than he is to Blackbeard,” Malkovich added.