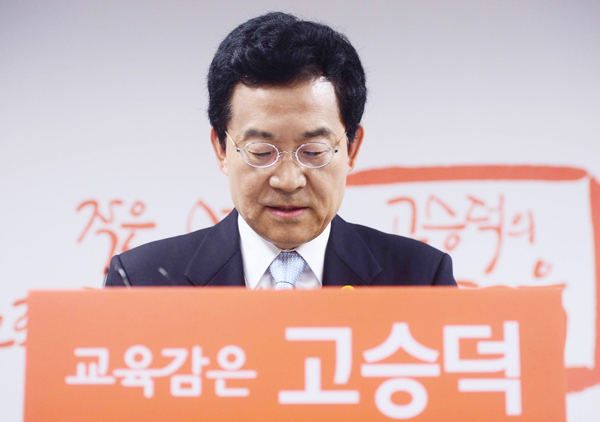 Koh Seung-duk, a candidate for superintendent of the Seoul education office, speaks at a press conference yesterday in response to an open letter posted by his daughter on her Facebook page Saturday. [NEWSIS]

Koh Seung-duk refused to withdraw from his candidacy for superintendent of the Seoul education office yesterday in the face of his daughter’s allegation that he abandoned his two children from his first marriage.

In a press briefing yesterday, he raised suspicions that the whole situation might have been engineered as part of a smear campaign by relatives of his first wife and rival Moon Yong-lin’s campaign team.

Addressing his opponent, he added, “Please do not exploit my sad family history to win the election.”

The press briefing came when Koh, a former judge, came under fire after a woman who claimed to be Koh’s oldest daughter from his first marriage wrote an open letter “to the citizens of Seoul” on her Facebook page, saying that Koh is not qualified for the position because of his negligence in taking care of his own children.

“Seoul’s citizens deserve to know the truth about the person they may be choosing to represent and be in charge of Seoul’s education system: Seung Duk Koh never partook in the education of his own children,” said Candy Koh in her post Saturday.

Koh, 27, said her father has never contacted her or her younger brother “despite the existence of a telephone and Internet” since her mother took her and her brother to the United States when she was 11 years old. The two divorced in 2002.

The daughter went on to say that she decided to go public about Koh’s disregard of his own children because she felt compelled to “inform the citizens of Seoul” that her father “does not qualify for this position.”

“If the role of a superintendent of education is to look after the educational policies and systems of a city, Seung Duk Koh is a stranger to this role,” she wrote. “How can he act as the leader of education for a city when he is unwilling to teach his own flesh and blood?”

After reports of the post Saturday, Koh, who has maintained a lead in a number of popularity polls in the lead-up to the June 4 elections, acknowledged Candy Koh as his daughter and held a press conference yesterday to respond to the Facebook post.

Koh refuted his daughter’s claim that he never contacted or met his children.

“I met the children every few years when they came to Korea for a visit. I talked to my daughter on the phone or exchanged text messages. It may be possible that she didn’t feel it was quite enough [from me as a father]. But I want to correct misunderstandings that there had been no contact whatsoever between me and her.”

In a sign of his recognition that the unfolding situation had dealt considerable damage to his campaign with only three days to go before voting, Koh went into detail about his first marriage to explain his side of the story.

“As you all know, I was the second son-in-law of Park Tae-joon, a former chairman of Posco and a political and business heavyweight,” said the 57-year-old Koh. “I came from a modest family from the countryside. .?.?.?I should have known better the consequences of marrying into a chaebol family.”

Koh also raised suspicions that the Facebook post was part of a smear campaign by the relatives of his first wife and Moon’s campaign team to force him to abandon the race, claiming his ex-wife’s relatives and Moon have maintained a close relationship.

“I am having suspicions that my daughter’s post was made out of collusion between the late Park Tae-joon’s son and Moon’s campaign team,” said Koh.

Candy Koh dismissed her father’s press conference as “irrelevant” to the context of her Facebook letter in an email interview with the Korea JoongAng Daily.

“I do not think that any of the details he mentioned in the press statement regarding his personal life are relevant to the content of my letter or what should be important to voters in choosing the right candidate for an educational leader.”

She emphasized that her open letter was not part of any smear campaign and that she acted on her own solely to “inform Seoul’s citizens that the man never partook in the education of his own children, mentally or financially.”