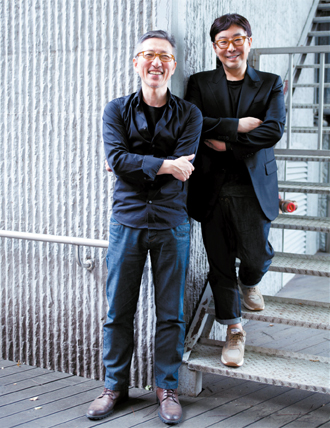 Choreographer Ahn Sung-su, left, and fashion designer and artistic director Jung Ku-ho create dance performances that are considered “unprecedented.” The duo’s “Dan,” performed by the National Dance Company, kicked off its performance at the National Theater of Korea on Saturday. By Jeon Ho-seong

Ahn - as nominee for one of the most prestigious international ballet competitions, the Benois de la Danse Awards - is known for his exquisite visualization of minute movements made to music.

Jung, former executive creative designer of Samsung’s Cheil Industries, has been a leader in the local women’s fashion industry with his brand KUHO.

These two men have been taking center stage in the country’s performing arts world, successfully staging two collaborative works: “Poise,” which was performed by the Korea National Ballet in 2012, and “Dan,” which was presented by the National Dance Company last year.

Dance performances in Korea have been somewhat weak in presentation compared to other genres, and critics say the duo have ushered in a new sensation with their upgraded stage aesthetics.

Late last year, when Jung bid adieu to Cheil Industries after 10 years, he and Ahn began to collaborate more closely and presented more works. In March they created the sold-out show “Two in Two,” which combined tango and flamenco and starred ballet dancers Kim Ju-won and Kim Ji-young.

Last month, they tried their hand at directing dancers from modern, ballet and traditional Korean genres with “Arts of Evolution.”

“If Ahn wasn’t married, people may have misunderstood our relationship,” said Jung.

The two 52-year-olds boast a 20-year friendship and they still have mutual respect for one other, calling each other “teacher.”

It was Ahn who gave Jung the opportunity to realize his ideas. In 1992, Jung, who has a “love for dance,” was studying fashion in New York. His friend, Ahn Eun-mi, also a renowned dancer, visited him and suggested they go see a performance of a “fantastic Korean choreographer,” which was Ahn Sung-su.

Their friendship truly began when Ahn asked for Jung’s advice on costumes.

Artists are known to be especially stubborn when it comes to their work, but the “perfect match” say they never have conflicts. When one of the two comes up with an idea, the other always looks for ways to make it possible.

Having “unbounded confidence” in each other, the duo says they collaborate as if they are in a “Ping-Pong game,” exchanging ideas and suggestions.

On Saturday, “Dan” kicked off at the National Theater of Korea. It is being staged every other day by the National Dance Company, alternating with the company’s “Mookhyang,” which Jung directed with choreographer Yoon Seong-ju.

The duo says they are “eager to continue transforming Korean dance to become more contemporary.”

They’ve already begun creating a new production titled “Tournament” for the National Dance Company, which is scheduled to be staged in September.

The production will also include participation from Yoon, who choreographed “Mookhyang,” with the aim of becoming “some kind of a battle or a ‘tournament.’?”

Jung and Ahn both said it’s unprecedented to have “two distinctively different choreographers work on one show.”

“Since the two choreographers have to work complexly, I will be the happy one and they will have the headaches,” joked Jung.

Left: “Dan” is a modern dance performance that reinterprets traditional dance. It is directed by Jung and choreographed by Ahn. Right: “Mookhyang” is being staged at the National Theater of Korea. The show is staged every other day, alternating with “Dan.” Provided by the National Dance Company

“Unlike other dance performances, we included special effects and wit,” he added. “The trial of adapting the formation of usual dance performances is part of an effort to attract the public while maintaining the artistic value of dance.”

Jung said this is his first time taking a break from working as a fashion designer since he was 18. For now, he said he’ll concentrate on working on stage dance performances.

“Personally, the value of fashion has become a little different to before,” explained Jung. “So it is less interesting for me.”

He added that he wants to do something that will make him passionate until the last day of his life.

“Working to create stages gets more and more interesting for me,” said Jung. “I am currently trying to experiment on creating a stage that’s a convergence of the performing arts.”

If he is successful, he said, the new works will be a totally new concept of dance performance.

“Ahn and I aren’t looking for a position that is stable,” Jung elaborated. “I believe we’ve been ‘verified’ of our talents with previous works, so now we should be in a position where we do things that others were afraid to try.”

Ahn also said he wouldn’t have tried doing “that kind of experimental stage if it weren’t for Jung’s direction.”

“I am confident,” said Ahn. “Someone like Jung can break such a conventional frame. I have confidence in him that he will turn it into something very interesting. That’s why I continue to work with him.”

The JoongAng Sunday recently sat down with Ahn and Jung to hear more about their collaboration.

Q. You two have been working together for quite a long time, but it was only recently that Jung got really involved in the productions. Why?

A. Jung: I’ve been providing ideas for some time. I really got involved since “Poise,” when then-artistic director Choi Tae-ji recommended [me] for the Korean National Ballet’s 50th anniversary work.

Ahn: In fact, many of my earlier works were directed by Jung. He suggested visual aspects of the shows like “Time” in 2001 or “Choice,” which received the Critics Award in 2004. I just did the choreographing.

Jung: Ahn even asked me rather than a visual writer to do the image work for his “Dance meets image” in 1998. Since then I was able to expand my role. Had it not been for Ahn, I wouldn’t have stepped foot into the dancing world.

What aspects of each other do you respect?

Ahn: He can do what I can’t do. And he does it well. Just with words of advice from Jung, it’s impossible for me to visualize it. But for a visual that I don’t even know, I create a movement and Jung make full use of that “movement” and creates something, every time.

I have this unbound confidence and faith in him that nothing is impossible with Jung.

Jung: I, too, have no doubt that whatever idea I suggest, Ahn will choreograph a dance that will best suit it. Honestly, I do think I sometimes give him little challenges.

If I have an idea that I want to realize, but I think it would be quite challenging, I still suggest it to Ahn. But every time, he does a perfect job. I think that’s why we are still working together.

How do you work together? What’s the process?

Jung: No matter who comes up with the idea first, we develop it like a Ping-Pong game. For example, if I suggest using so-and-so composer’s songs for our new work, Ahn picks out one of the composer’s songs. Then I add something else and he does too on top of mine. It’s really like Ping-Pong.

Ahn: Yes. It’s a Ping-Pong game, but not to win. We just exchange balls, add up ideas and develop them to create a work that satisfies both of us. For example, in “Dan,” Jung suggested taking one visual aspect out to make it modern. It was exactly what I felt was needed.

Concerning your recent collaboration, some critics say that Jung’s direction distracts from the choreography.

Ahn: I disagree. It makes the choreography richer. If I was doing it alone, I wouldn’t make something like “Dan.” The performance reinterprets traditional gut [Korean exorcism] performance as modern, and it wouldn’t work with just the choreography. You need to think hard about the color, design, music, lighting and visual images to turn it into a performance. All of that is done by the director. I can’t agree that such an important aspect of the performance is interrupting or obscuring the dance.

Jung: Whether it be ballet or Korean dance, the stages are often very showy. My works tend to be very simple, but people say that such simplicity makes it stand out even more. My focus is to let the audience see the dance and every detail of the movement of the body.

I select music or costumes with that focus. I also worked with “Dan” to let the audience enjoy the beauty of the choreography, so I disagree that the two conflict.

“Dan” premiered in 2012. How will the upcoming performance be different?

Jung: The details become perfect. In performing arts, performances raise the degree of completion by doing reruns. Such an opportunity of rerunning the show is very encouraging. The process of turning it into a repertoire is very important.

Ahn: Jung came up with new ideas for music and lighting. There’s also a change in dancers’ moving lines. “Mookhyang” is even better. I didn’t choreograph it, but the whole image is very beautiful. It could really become Korea’s representative work.

After “Dan,” the National Dance Company received fierce criticism for going for something modern.

Ahn: People also asked what will be left of the National Dance Company if it, too, requests works by contemporary choreographers. But what’s wrong with a Korean choreographer creating a work that presents current Korean dance?