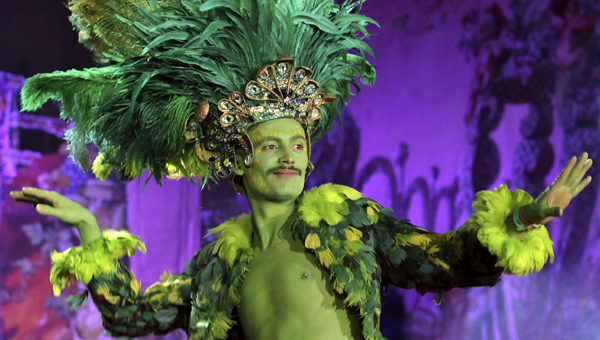 Models perform on stage during the opening ceremony of Life Ball in front of City Hall in Vienna, Austria, on Saturday. Life Ball is a charity gala that raises money for people living with HIV and AIDS. [AP/NEWSIS]

This year’s Life Ball took place as the Austrian capital basked in the victory of the bearded drag queen Wurst earlier this month, which has at least temporarily given it a self-image as a hotbed of tolerance.

A partygoer who identified himself as Aaron, covered in glitter and topless but for a pair of nipple pasties, said the victory of Wurst - due to perform her winning power ballad “Rise Like a Phoenix” later in the night - had changed the atmosphere.

“I’ve been here four times before, but this one is by far the best. Usually we hide ourselves before coming to the ball, but this year we can walk openly,” he said.

Skimpy costumes were de rigeur, and guests wearing outfits the organizers’ “style police” judged to be exceptional could win half-price admission to the Vienna ball. Tickets are normally distributed by a lottery and cost 160 euros ($220).

The Life Ball raised about 2.4 million euros last year, much of it donated to the Clinton Health Access Initiative to treat and reduce HIV infections in children. The event this year is inspired by the 15th-century Hieronymus Bosch triptych “The Garden of Earthly Delights.” The ball has drawn criticism for using Bosch-like posters featuring a nude transgender model, Carmen Carrera. Photographer David LaChapelle designed two versions, showing Carrera with either male or female genitalia, along with the slogan: “I am Adam - I am Eve - I am me.” Life Ball organiser Gery Keszler said the poster was intended to provoke discussion, not to exploit Wurst’s Eurovision victory.