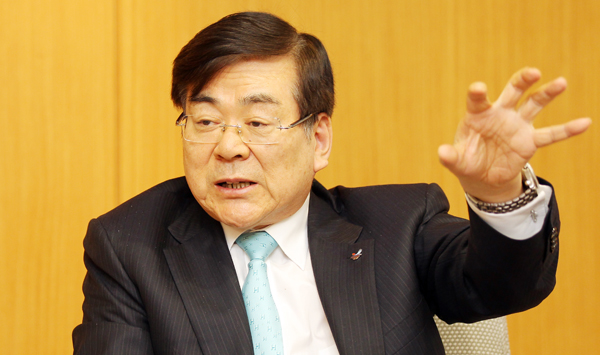 DOHA - The International Air Transport Association’s (IATA) Annual General Meeting (AGM), which ended yesterday and was attended by more than 1,000 guests, brings together CEOs and executives of its 242 member airlines, which carry 84 percent of global traffic.

In its 70th year, the three-day event hosted by Qatar Airways also celebrated the first 100 years of commercial aviation. The commercial airline industry began with a flight across Tampa Bay, Florida, on January 1, 1914.

KAL Chairman and CEO Cho Yang-ho is a particularly active participant in the AGM because he is a member of the IATA Board of Governors.

The 65-year-old, who also heads Korea’s ninth-largest conglomerate, Hanjin Group, was re-elected to the IATA Board of Governors last year for another three-year term, which was also his seventh election to the board since 1996. Cho works for IATA’s Strategy and Policy Committee, one of the core committees in the aviation lobbying group.

“The IATA AGM is an event at which you can learn about how aviation policy is changing and what’s the hottest topic in this industry,” Cho told the Korea JoongAng Daily. “There is a reason why I come to this meeting every year.”

“The International Civil Aviation Organization and IATA have set base safety standards required for all airlines,” he said. “We are obviously following that standard and how safety can be strengthened from that standard depends on an airlines’ individual ability.”

The IATA predicted that air carriers will make $18 billion in profit in 2014, lower than its March forecast of $18.7 billion, following concerns over the Chinese economy and a slowdown in world trade.

Korean analysts have been worried about KAL’s financial stability because of its financial support for struggling Hanjin Shipping, the nation’s largest marine shipper. Cho officially became CEO of the shipping company last month.

KAL injected 250 billion won ($244 million) into Hanjin Shipping last year and will give 400 billion won in support to the shippers’ capital increase by issuing new stocks.

“There will be no surprise [of additional support],” Cho said. “The support will be carried out as planned.”

Despite analysts’ concerns that the support to Hanjin Shipping will put KAL’s credit rating at risk and affect its debt ratio, Cho said that there would be no problems. As of the first quarter, the flag carriers’ debt ratio was more than 800 percent.

“The aviation industry is different from other industries and should not be judged at the same standard,” he said. “An aircraft is counted as a liability, but it’s not a fixed asset like a production plant and if there is a problem, we can just sell it, whereas it’s difficult to sell a plant that’s under construction.”

At the IATA AGM, Cho and his son Cho Won-tae, who is CEO of Hanjin KAL, the holding company of the group, and executive vice president of KAL, were busy meeting airline executives and aircraft manufacturers.

“Chairman isn’t an easy position, you know,” Cho said with a laugh.

One CEO Cho met with was Dave Barger, who heads the United States’ leading low cost carrier JetBlue Airways. KAL signed an interline agreement in 2012 with JetBlue to provide better connecting services to customers traveling from Korea to the United States.

“We talked about expanding routes that KAL or the SkyTeam alliance can’t cover,” he said. “We tried to work with airlines that provide better services and connections to customers, and at which cost isn’t a problem.”

At this year’s AGM, Cho was accompanied by John E. Jackson III, who is vice president of passenger marketing and sales for KAL’s regional headquarters in the Americas, indicating that the air carrier is trying to increase business in those continents.

Jackson said that Cho has always told him to be competitive. The American said he feels pressure as competition for routes in North America between KAL and its small rival Asiana Airlines is heating up. Asiana will begin flying its new A380 jumbo jet to Los Angeles in August.

In the face of tough competition, Cho says bring it on.

“Our A380 aircraft isn’t inferior to Asiana’s and we have been winning other routes that operate the same aircraft, so it’s not going to make a big difference,” Cho said. “Aircraft alone can’t change the whole game, because there are also services, connections and schedules that you need to consider.”

As for the global rise of LCCs, Cho said that full-service carriers and LCCs are different. KAL has local LCC Jin Air under its wing and the small carrier has been successful recently.

“LCCs are creating a new market and that’s good thing,” he said. “However, service will vary and the distance they can travel is limited, so they are just different.”

At the AGM, IATA reported that “the divergence in growth trends between cargo [slow] and passenger [robust] is creating challenges for airlines.” Though KAL saw only slight growth in its cargo business in the first quarter compared to a year ago, Cho said the company is strong.

“Cargo isn’t an easy business that anyone can just enter and carry out because you need experience, service and a network,” he said. “Having aircraft doesn’t mean you are guaranteed to do cargo business - just look at other airlines that are getting out of the cargo business.”

IATA Director General and CEO Tony Tyler said at the event that “Airlines themselves remain burdened with high taxes and weak profitability.” IATA expected that the industry’s net profit margin will stay at just 2.4 percent.

However, Cho was optimistic that KAL can still grow, thanks to a strong won that levies its cost burdens.

“This is a good situation for us,” he said. “As fuel costs are stabilized with a strong won, we need to take advantage of this situation as much as possible.”