Jong-un’s Japan deal could be tough

Jong-un’s Japan deal could be tough 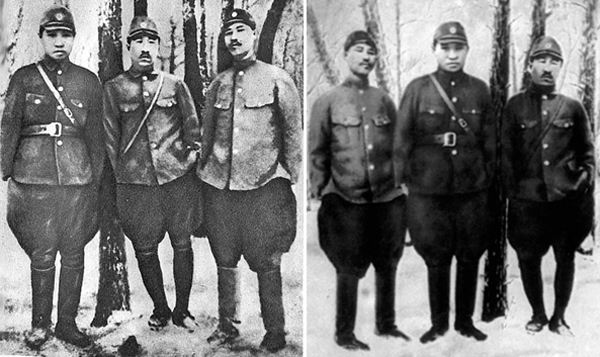 In the first photo, North Korean founder Kim Il Sung, left, with two other anti-Japan independence fighters, including Choe Hyon, father of the once-powerful Choe Ryong-hae, a party secretary, in the middle. To emphasize his history as a Communist guerilla fighter, the regime doctored the original shot and placed Kim in the middle in the second photo. [JoongAng Photo]

North Korean leader Kim Jong-un is having surprising success with diplomacy with Japan.

He recently reached an agreement with Tokyo to investigate the issue of Japanese abducted to North Korea in the 1970s and 1980s, which may lead to the lifting of some economic sanctions on the regime, a deal that even his father Kim Jong-il could not reach.

Analysts say it’s notable that Kim has chosen Japan for his first diplomatic outreach in the two and a half years since he assumed power after his father’s death in December 2011.

A South Korean government official told the JoongAng Ilbo on Monday: “It was just a relationship between two isolated leaders, Kim and Japanese Prime Minister Shinzo Abe, both of whom have no friends in Northeast Asia.”

The deal threatens to break the united front that Japan, South Korea and the United States have maintained in dealing with Pyongyang.

But analysts say it’s still unclear how the negotiations managed to succeed or what either country really wants from the other. North Korea promised that a “special committee” would be launched to investigate the abductee issue, but in the past it has steadfastly stonewalled Tokyo on the issue.

Tokyo claims that 17 of its nationals were abducted. In 2008, North Korea promised to open a reinvestigation of the abductions, which it didn’t follow through on.

Despite all of the uncertainties in their agreement, many analysts in Seoul say the accord will be implemented at least temporarily, especially to get Japan to relax some sanctions.

But Kim will also have a difficult time balancing his new cooperative approach to Tokyo with the regime’s longtime anti-Japan propaganda.

The anti-Japan politics of North Korea were established by his grandfather Kim Il Sung when he founded the regime on Sept. 9, 1948.

To cement his rule, the founding leader had to glorify and exaggerate his career as an anti-Japan Communist guerilla fighter.

But it will be hard to distort some parts of the family history. Kim Jong-un’s own mother, Ko Yong-hui, was born in Osaka in 1952, the daughter of a Korean man, Ko Kyong-taek, who was from South Korea’s Jeju Island.

In the early 1960s, Ko’s father decided to move to North Korea with his family and arrived at the port of Wonsan. They were among the 88,000 Korean nationals in Japan who chose to go to North Korea under an agreement between Pyongyang and Tokyo to exchange their nationals in the 1960s after the 1950-53 Korean War.

In North Korea, those migrants were discriminated against as minority dubbed “jjae-po,” an abbreviation of “jaeilgyopo,” or Korean nationals in Japan.

Despite her family history, Ko became an actress with the state-controlled Mansudae Art Troupe and got married to second-generation leader Kim Jong-il. She gave birth to three children, including Kim Jong-il. Due to her birthplace, Pyongyang officials and people reportedly ridiculed her, saying “our dear leader [Kim Jong-un] is not in the bloodline of Mount Paektu. He is in the bloodline of Mount Fuji.”

(According to the party line in Pyongyang, Kim Jong-il was born on the slopes of the sacred Mount Paektu, the mythical birthplace of the entire Korean race, although he was actually born in a military camp in the Soviet Union in 1941.)

A South Korean intelligence official told the JoongAng Ilbo that Ko’s father also worked as a manager of a Japanese military uniform manufacturer. Born in Jeju, the father went to Japan in 1929 when Korea was under the colonial rule of Japan, and worked at a clothing factory that produces uniforms for the Japanese army, the official said.

“Kim Jong-un must be struggling in his diplomacy with Japan, including how to make a shift from the regime’s traditional anti-Japan stance,” said defector-turned-analyst Ahn Chan-il.