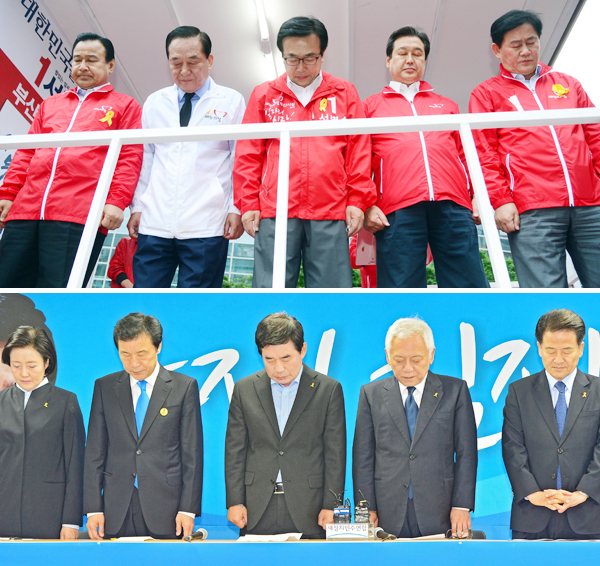 Top: Just one day before the voting day, leaders of the ruling Saenuri Party pay silent tribute to the victims of the sunken ferry Sewol yesterday in Busan before they stump for the party’s candidate in the Busan mayoral race. [NEWSIS]Above: Leaders of the main opposition New Politics Alliance for Democracy offer silent tribute to the Sewol victims yesterday in Suwon, Gyeonggi, before they have a campaign strategy meeting. [NEWS1]

The ruling Saenuri Party adopted a highly defensive message going into today’s local elections and urged voters to give its candidates a chance to help President Park Geun-hye turn Korea around after the death of more than 300 people in the April 16 sinking of the Sewol ferry.

The opposition made the opposite pitch and told voters to use the election as a referendum on the president’s performance - particularly her government’s tragically botched rescue of the ferry and its doomed passengers, most of them high school students.

Instead of trying to woo voters with policies or campaign promises, Lee Wan-koo, floor leader and de facto interim president of the Saenuri Party, released an appeal to voters yesterday.

The sinking of the ferry and its affect on the president and ruling party’s popularity completely upended the campaign for governors, mayors and lower posts nationwide.

In today’s elections, more than 3,900 people will be elected in four tiers of local government: the mayors of the eight major metropolitan areas - Seoul, Busan, Daegu, Incheon, Gwangju, Daejeon, Ulsan and Sejong City - and members of their city councils and education superintendents; governors of the country’s nine provinces, members of their provincial councils or legislatures and education superintendents; mayors of 74 smaller cities and their city council members; and heads of the country’s 69 district offices and members of their district councils.

Particularly tight matches are expected for governor of Gyeonggi and mayor of Incheon - two regions near Seoul that are considered barometers of ordinary voters’ opinions - as well as governor of North Chungcheong and mayors of Daejeon and Sejong, located in central South Korea.

In the Seoul mayor’s race, which was expected to be tight before the Sewol tragedy, most polls show incumbent Park Won-soon of the main opposition New Politics Alliance for Democracy outpacing his Saenuri Party rival Chung Mong-joon by more than 10 percentage points.

Before the Sewol accident on April 16, it was widely believed the ruling Saenuri would dominate in the local polls, largely because the approval ratings for President Park hovered above 60 percent on the back of strong support from the older generations.

But the tragedy that killed 288 and left 16 still missing robbed voters of confidence in the government and the ruling party. Park’s approval ratings nose-dived to the 40 percent range.

To make matters worse, Ahn Dae-hee, a “Mr. Clean” whom the Blue House confidently nominated to be the new prime minister, withdrew his nomination after it was revealed he earned more than 1.6 billion won ($1.56 million) in a matter of five months after retiring from the Supreme Court and going into private law practice. Park’s choice led many voters to doubt that her administration was sincere in its promises to start cleaning up the collusion and corruption that led to the worst maritime accident in modern Korean history.

But as voters turned from the ruling Saenuri Party, many chose not to turn to the opposition NPAD.

In the third week of May, over one-fifth of voters surveyed said they wouldn’t vote for either party, according to Realmeter, a polling agency.

“The majority of races are expected to be neck-and-neck,” said Saenuri leader Lee on a local radio show yesterday. “It’s really hard to predict the results.”

Currently, the Saenuri holds nine gubernatorial seats, trailed by the NPAD with seven. One governor is an independent.

In the last pre-election poll for the race in Seoul by the Yonhap News Agency on May 27 and 28, 52.4 percent of 1,000 adults said they would vote for Park Won-soon, whereas only 34.7 percent rooted for Chung. Polls are not allowed within six days of elections.

Chung, a seven-term lawmaker and former chairman of Hyundai Heavy Industries, was dealt a blow after his youngest son criticized grieving families of the Sewol victims as “uncivilized” on Facebook on April 21.

The Blue House acted calm ahead of the elections. The president did not schedule any official events for yesterday. She emphasized in a meeting with her senior secretaries on Monday that the elections should be “fairer and cleaner than any elections before.”

Her secretaries and other Blue House staff tried to say little to avoid any gaffes.

But the election results may shape the remaining three years and nine months of the Park administration. Upbeat results would give Park momentum to proceed with political and economic reforms. A big defeat would force the Blue House to administer a full-fledged reshuffle of the cabinet as well as the presidential office to win back public confidence.

In the past five local elections, the ruling party triumphed only in 1998, the second year of the Kim Dae-jung administration. Local elections on June 2, 2010, the third year of the Lee Myung-bak administration, saw the ruling Grand National Party, the predecessor of the Saenuri Party, winning in only six, or 37.5 percent, of the 16 major races for governors and mayors. At the time, the approval rating for Lee was 46.1 percent, according to Gallup, similar to President Park’s 47 percent at the end of May.

“Ruling parties always struggled in past local elections,” said a Blue House official. He said the Saenuri Party is hanging tough despite the ferry disaster, and that is largely thanks to the “power of President Park.”