Stars get vocal about voting

Stars get vocal about voting

They say Korea’s 20-somethings are politically apathetic these days because a lot of young people see Election Day as just a way to get time off from work.

But scores of K-pop stars are concerned about their local communities. Celebrities ranging from the established to the new visited voting stations in their neighborhoods and posted messages on social media encouraging fans to exert their lawful right as citizens.

“I rock because I can vote!” was the first message that came from Lee Hyo-ri.

Lee is an icon of the early 2000s K-pop industry, but in recent years she has been vocal about animal rights and protecting the environment.

While many ’90s stars have shied away from voicing their political opinions in the past, 21st-century pop stars have become much more straightforward in expressing their thoughts.

Hwang Chan-sung of boy band 2PM, for example, has revealed his thoughts about many national social issues since he joined Twitter in summer 2010. “Finally, local election day is tomorrow..! Let’s vote, everyone! You can’t say anything about the result if you just condone your right as a voter. As soon as you become apathetic [toward politics], you’re giving up your own sovereignty. Let’s make use of this golden opportunity,” Hwang tweeted Tuesday. He followed the tweet up yesterday with an additional message showing the voting stamp on his wrist. 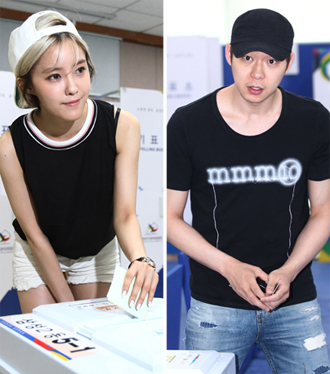 Hwang then retweeted his SHINee bandmate Kim Jong-hyun’s message, which quoted Plato: “One of the penalties for refusing to participate in politics is that you end up being governed by your inferiors.”

The message got more than 5,500 retweets.

And polling stations of southern Seoul were filled with high-profile stars, ranging from Ji-yeon and Hyo-min of six-member band T-ara to Niel of Teen Top. Famous TV personality Jun Hyun-moo of the JTBC show “Crime Scene” posted a photo on his Twitter account with the message “You can’t complain if you don’t vote.”

Singer and actor Park Yu-chun of K-pop trio JYJ, whose birthday coincided with Election Day, went to a Samseong-dong polling station to cast his ballot early in the morning before taking off to a fan meeting of 6,000 people at a hall in Gyeonggi.