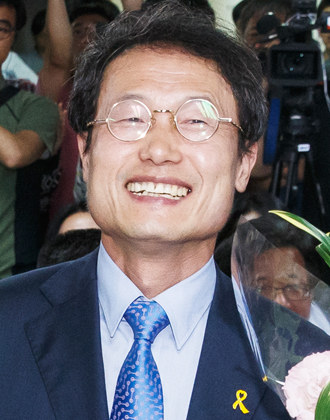 Seoul’s newly elected education office chief Cho Hi-yeon said he isn’t planning to radically reform the city’s current policies, despite some of his progressive pledges, including shutting down some elite high schools.

“I want to say this to parents in the city: ‘Don’t feel anxious because I was elected,’” Cho said in a radio interview yesterday. “As my duty is to handle the education of children, I think it is important to maintain stability in policies.

“Even if there are some changes, I will try to minimize confusion and other repercussions that affect the children due to the changes,” he said. “So don’t worry too much about me.”

When asked about the pledges he jointly made with 12 other liberal superintendent candidates who won their races Wednesday, including boosting the role of ordinary schools, Cho said he has no intention of shutting down all of the elite private high schools, such as foreign-language high schools.

“We never pledged [to shut down] the special-purpose high schools, such as foreign-language high schools or science schools,” Cho said. “The problem is the newly built autonomous private schools. We promised to turn some autonomous schools into ordinary public schools if their management was shoddy and ineffective.”

Started in 2009 under the Lee Myung-bak administration, autonomous high schools maintain financial independence from the government and in return are granted more freedom in picking students, creating their curriculum and charging tuition.

More and more autonomous schools have asked the Ministry of Education to turn them back into ordinary schools because they could not fill their classrooms. As a result, in August 2013, the government started to shut down some inefficient autonomous schools.

In an interview with the JoongAng Ilbo yesterday, Cho pledged to make all schools “revolutionary schools” that focus on the personality of students and nurturing creativity.

“I will reduce the number of students to 25 per class and fund 70 million won in total for 183 ordinary schools annually,” he said.

The victory of Cho in Seoul was one of the most unexpected in the June 4 local elections, drawing attention to him and his campaign pledges.

Cho, 57, studied sociology at Seoul National University in the 1980s and became a sociology professor at Sungkonghoe University, which is known as the alma mater of many liberal scholars and NGO activists.

Cho is a founding member of the People’s Solidarity for Participatory Democracy, one of the country’s major liberal civic activist associations.

Cho appeared to keep a distance from the Korea Teachers and Education Workers Union, the biggest association of liberal teachers in the country.