Board okays the dismissal of KBS head

Board okays the dismissal of KBS head 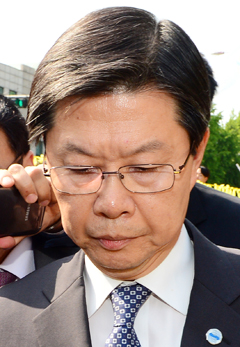 Members of two Korea Broadcasting System (KBS) labor unions on a weeklong strike returned to work yesterday after the state-run broadcaster’s board of directors approved a motion of dismissal against Gil Hwan-young, the KBS president accused of meddling in news coverage of the Sewol ferry disaster.

Three of the supporting votes came from seven board directors appointed by the ruling Saenuri Party, while all four members recommended by the opposition New Politics Alliance for Democracy (NPAD) backed the dismissal.

Under the Broadcasting Law, the head of state has the authority to appoint and dismiss a KBS head. President Park Geun-hye must still agree to dismiss Gil.

The fact that three Saenuri-supported directors agreed to sack Gil corroborates deepening worries within the ruling party that the discord at KBS could help turn the public against the Park government because of its alleged interference in the media.

The passing of the proposal Thursday came 27 days after KBS newsroom chief Kim Si-gon dropped the bombshell revelation that his editorial freedom as a journalist had been breached by Gil. Kim claimed that Gil had ordered reporters to put a positive spin on news stories dealing with the search efforts in waters off Jindo.

Kim’s revelation was made while the state broadcaster was under attack for what many saw as government-friendly reporting on the Sewol sinking. Critics said KBS tended to exaggerate the scope of the search and rescue efforts and failed to report complaints about the operation made by victims’ families.

The state-run broadcaster’s trouble began when a remark by Kim was reported early last month in which he seemed to shrug off the loss of lives in one of Korea’s worst maritime disasters. At a lunch with KBS reporters, Kim allegedly said: “The Sewol accident may look like it took a huge number of casualties because 300 people died at once. But the number is not that high considering the number of people killed in car accidents annually.”

Facing mounting pressure to step down from his post, Kim held a press conference May 9 during which he tendered his resignation and disclosed that KBS President Gil had pressured KBS newsroom reporters not to criticize the search operations. The revelation prompted two KBS labor unions to go on strike late last month.

The strife soon became a political issue ahead of the June 4 local elections. The main opposition NPAD was on the frontline calling for the immediate dismissal of Gil.

“We support the proposal, though it was passed belatedly. President Park Geun-hye should accept the proposal without delay and appoint a president who will reflects demands of the people and workers at KBS,” said Representative Han Jeong-ae, spokeswoman of the NPAD, during a press briefing yesterday at the National Assembly.