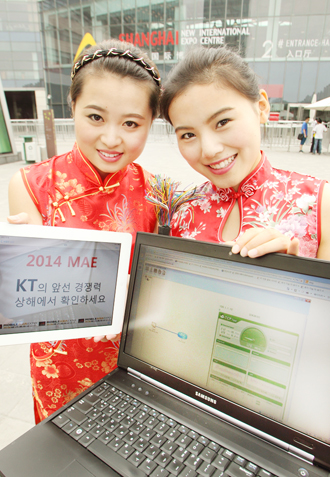 Korea’s mobile carriers will display their new technologies and convergence services at the Mobile Asia Expo (MAE) 2014, the largest mobile communications exhibition in Asia, which will be held in Shanghai for three days starting Wednesday.

The nation’s No. 2 mobile operator KT said it will introduce convergence services for the global market and innovative wired and wireless devices to lead the Giga Internet age.

At the event, KT will be promoting its goal to become Korea’s No. 1 mobile operator and the leader in mobile and landline telecommunications using Giga Internet.

KT said yesterday it will showcase Giga infra technologies such as Giga Wi-Fi and Giga Wire networks and a virtual Hallyu Star Photo Box at MAE.

Giga Wi-Fi allows a download speed of 1.3 gigabytes per second which is three times faster than the current Wi-Fi network.

Along with it, KT will operate Hallyu Star Photo Box and Star Lounge, the world’s first K-pop hologram exhibition halls, which it launched in January.

In the Star Photo Box, visitors can take photos with images of Hallyu stars such as Psy, 2NE1 and Big Bang.

KT will install Wi-Fi at MAE venues so that visitors can communicate and share photos and videos.

KT Chairman Hwang Chang-gyu will be a keynote speaker on Wednesday at MAE, which will be his first global event since he was inaugurated in January.

The nation’s No. 1 mobile operator SK Telecom said it will also participate in the MAE.

SK Telecom will be the only Korean company with its own exhibition center in which it will share its space with start-ups and SMEs, some of which are SKT affiliates, to help them introduce their technology to overseas markets.

SKT said the companies have had difficulty expanding their businesses overseas due to low awareness and a lack of capital.

ISL Korea will introduce Big Note, an electronic blackboard. Petfit will display its “appcessory” called Smart Electronic Dog Collar which allows dog owners to monitor a wide range of detailed information about their pet such as its temperature, location, how long it has slept and how much exercise it has been doing, via Bluetooth connectivity.

“Through a joint exhibition with SK Telecom, we will not only raise our product awareness but also have opportunities to meet with foreign buyers and overseas mobile carriers,” said Lee Jae-hyuk, CEO of Ara Networks.

The third annual MAE is organized by the Groupe Speciale Mobile Association, an association of global mobile operators and related companies, and is attended by about 20,000 visitors each year.