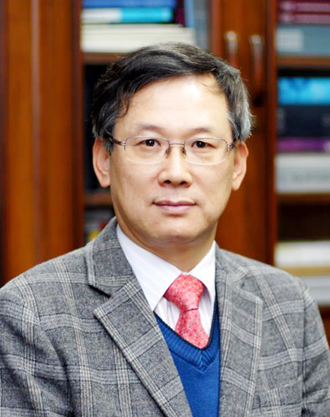 Journalist Yoon Doo-hyun, head of YTN Plus, was named to replace Lee Jung-hyun as senior presidential secretary for public affairs, according to the Blue House yesterday, amid a major shake-up of the presidential staff.

“Through his longtime experience as a journalist, including as YTN editor-in-chief and head of the political division, Yoon has demonstrated balanced thinking and keen analytical abilities,” Min said.

Yoon was born in Gyeongsan in North Gyeongsang, a region considered the ruling party’s stronghold, and was an English major at Kyungpook National University.

He started his career in journalism as a reporter at daily newspaper Seoul Shinmun. He joined cable news network YTN in 1995, where he has served as head of the international news desk, head of the politics desk, and eventually YTN’s editor-in-chief.

From March, he served as president of YTN Plus, a subsidiary of YTN responsible for digital content.

Yoon, the presidential spokesman added, is expected to be a “communicator to explain government reform policies to the public and seek understanding and cooperation from the people.”

The appointment comes, said Min, after Lee’s resignation was approved by President Park.

Lee, who has served in the presidential office since Park’s inauguration, was considered one of Park’s closest aides.

He suddenly tendered his resignation last week as a reshuffle of the Park administration kicked off in the wake of the Sewol ferry accident on April 16.

Lee, nicknamed Park’s “mouthpiece” since her campaign days, is reportedly considering running for a parliamentary seat in the upcoming July 30 by-elections. Other sources claim he might be given a ministerial position.

On June 3, 2013, Lee, who was political affairs senior secretary, replaced senior secretary for public relations Lee Nam-ki, who resigned last May over a sexual assault case involving then-presidential spokesman Yoon Chang-jung during Park’s visit to the United States. The appointment drew mixed reactions from the ruling and opposition parties.

Saenuri Party spokesperson Min Hyun-joo yesterday lauded Yoon as “someone who can mediate media and politics based on his background in broadcasting and in newspapers.”

“We look forward to smooth government public relations that will take into serious consideration dialogue at the level of the people,” he said.

The main opposition New Politics Alliance for Democracy spokesman Geum Tae-sub was critical of the appointment at a briefing yesterday, saying that Yoon is, “A typical sunflower-type journalist that will just cater to the government.”

Geum added, “Even after the approval of the dismissal of KBS President Gil Hwan-young, the Blue House continues to try to dominate the media and hold on to power.”

The Blue House named Ahn Dae-hee as its top choice but the nomination fell through after it was revealed that Ahn earned more than 1.6 billion won ($1.56 million) in five months after retiring from the Supreme Court and going into private law practice.

Park has emphasized she is looking for a prime minister with an innovative mind and ethical integrity.

An announcement of a new prime minister candidate was anticipated as early as yesterday.

Kim Moo-sung, a heavyweight and lawmaker of the Saenuri Party, announced his plans to run for party head in the upcoming party convention on July 14 at a press conference yesterday.