For one Sewol family, it was the child who lived

For one Sewol family, it was the child who lived 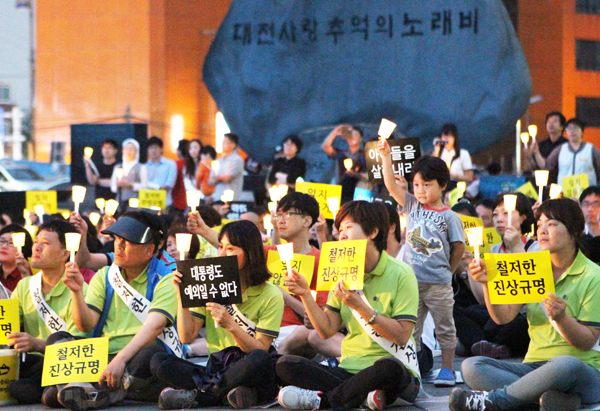 People stage a candlelight vigil Saturday night at Daejeon Station to urge the government to conduct a thorough investigation into the Sewol disaster and to come up with reforms of the kind of corrupt practices that may have led to it. [NEWSIS]

The sinking of the Sewol ferry in April claimed the lives of more than 200 students on a school trip to Jeju Island, leaving parents without their loved children.

For Cho Yo-sep, a 7-year old boy, it was the other way around. He and his father, mother and older brother were on board the Sewol for a family holiday on the scenic resort island before it capsized and sank into the waters off the southwestern coast.

Only the youngest member of the family survived. Yo-sep was on the deck when the Sewol capsized. His family was down below.

A funeral for the three victims was finally held Saturday after the body of Cho’s father, Cho Choong-hwan, was recovered from the choppy waters Thursday, 51 days after the fatal accident.

The bodies of both the mother, Ji Hye-jin, and brother, Cho Ji-hoon, were retrieved in April but the relatives decided to put off the funeral until the father’s body was found.

The family lived in Bucheon, Gyeonggi, but Cho Yo-sep is now living with his uncle Ji Seong-jin’s family in Seoul.

At the funeral held at Severance Hospital in western Seoul, Cho laid a white chrysanthemum on the altar and looked at the portraits of his parents and brother with a disarming smile.

Cho’s youthful naivete saddened many at the funeral. The boy is receiving counseling from the hospital twice a month.

Cho’s uncle said in a radio interview last month that Cho still doesn’t appear to fully realize that his family is gone.

“He thinks that his parents and brother went up to heaven, a good place, and knows that he can no longer see them,” said Ji.

“At first, he kept asking me if people can breathe in a sunken ship,” Ji said. “But these days, he doesn’t ask. He sometimes runs into the toilet and cries, which really breaks my heart.”

His brother was 11 years old and his parents in their 40s.

During the radio interview, Ji pointed out that most attention has gone to the student victims from Danwon High School in Gyeonggi and that relatives of the other victims have received less support and assistance from the government. Among the 476 passengers on board, 325 were Danwon juniors. Only 75 of the students on the ship survived.

“I totally understand how horrible it would be for parents to lose their children,” Ji continued. “But the other victims were also someone’s parents, brothers and family. I hope the government will take care of all of the victims.”

On Sunday, one more body was found in the wreck of the ferry, bringing down the number of missing to 13. Now, the death toll stands at 291.

The victim, a 28-year-old woman teacher from Danwon High School, was discovered on the third floor of the ferry.