Carving out a future for ancient art of seal cutting

Carving out a future for ancient art of seal cutting 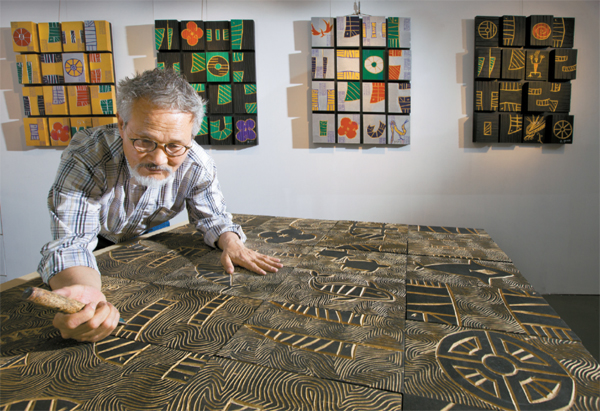 Seal engraving artist Jeong Go-am puts the final touches on a piece in his atelier in Samcheong-dong, central Seoul. He is known as the pioneer of Saeghim art.

When I arrived in his atelier in Samcheong-dong in central Seoul, his iconic work “Heaven, Earth, Human, Water, Fire and Wind” caught my eye. In the piece, he explores how hangul, or the Korean alphabet, came to life by showing ancient Korean letters behind King Sejong of the Joseon Dynasty (1392-1910), the creator of hangul. Next to the work was “Swaying Dreams,” in which flowers, the sun and fish were engraved with hangul consonants and vowels.

“Conceptual art takes everything in this world into the art,” explained the virtuoso, by pointing at the engravings of fish on the table. “As Buddha once said, ‘Form is identical to void, while the void itself is identical with form.’ This theme penetrates my work as well. From yin comes yang, and from life comes from nothingness.”

Born in Naju, South Jeolla in the late 1940s, Jeong has excelled in calligraphy and painting since he was young, but was never able to afford a proper art education because of the economic situation. So as soon as he graduated from middle school, he decided to work for his family instead. He did not start his career as a seal artist until he was in his late 20s, but he also had to do it all by himself, without a mentor to rely on.

Jeong says that his turning point came in 1983, when he finally met accomplished seal artist Jung Mon-kyung (1922-2008), who taught him the basics of traditional seal art. Since then, he has tried to delve deeper into the art of sealing by instilling a unique Korean style to an art that originated in ancient China. 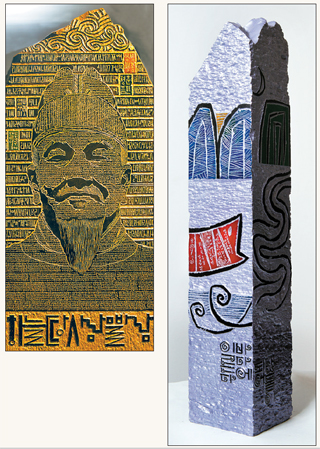 Above, “Heaven, Earth, Human, Water, Fire and Wind” is Jeong’s work inspired by hangul and King Sejong, who created the Korean alphabet. Right, Jeong said that Saeghim art is reinterpreting the aesthetics of Korean traditional art.

The most notable work he did at that time was recreating the ancient wall paintings of the Goguryeo Kingdom (B.C. 37 - A.D. 668) by seal engraving. Then he started to categorize his works as Saeghim - the Korean noun for engraving - because he always engraves his works in an original style, regardless of the artistic form.

But his works haven’t always been celebrated by mainstream art critics. Some said his attempts to “modernize” traditional seal art were unorthodox. 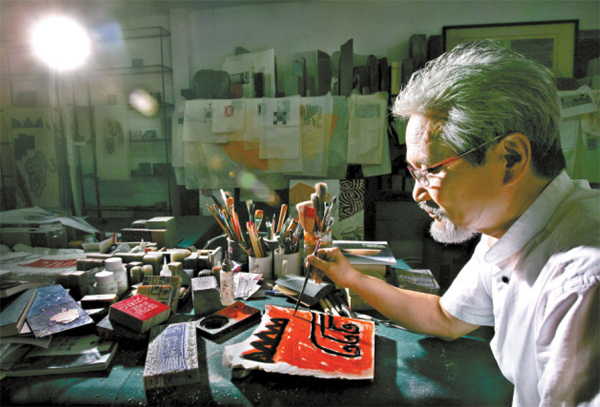 Jeong paints on a stone plate.

“Well, I think preserving tradition is not all about representing the ancient form as it is. Rather, art has to reflect the current society. So through my works, I have reconstructed the seal art by adding contemporary vibes.”

He went further to say that traditional artists should also take note of modernity and how it can appeal to wider audiences.

“Countless people told me that I am not original, because I wasn’t educated in an exclusive school,” beamed Jeong, adding that he just kept on doing what he had to do, despite the criticism.

“Every artist should capture the essence of human beings by examining his own self. And I think Saeghim engraving art is a great example.”