Sports and the message it sends

Sports and the message it sends 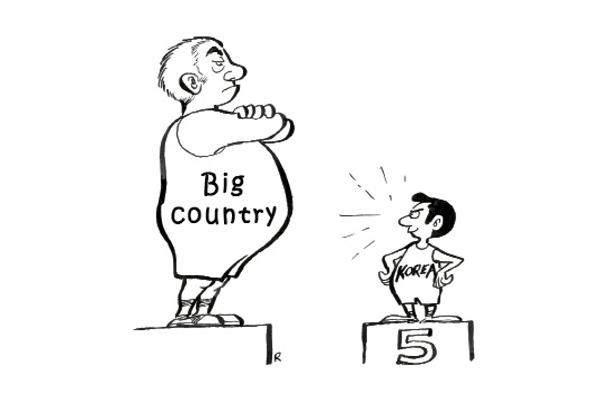 The 2014 FIFA World Cup kicks off today in Brazil. Sports are traditionally something you enjoy, not show off. However, Communist countries have used sports in the past to show off their state status by intensively training their athletes for international competitions. Korea has accomplished rapid development from poverty, and we have managed to become a sports power with a strategy of selective and concentrated investment and training.

While there was criticism that our athletes had to go through severe training and were only aiming for medals, the medals won at international competitions not only added to a sense of great pride and satisfaction, but also sent a clear message. While the advancements in our economy and culture may not be immediately clear, Korea’s status in the international community can be confirmed by its number of medals and our sports ranking.

The first international sporting event that gave Koreans great pride was the 1986 Asian Games. Korea hosted the event and finished in second place, closely behind China, reaffirming the country’s potential in Asia. Two years later in the 1988 Seoul Olympics, Korea surprised the world by winning the fourth-most gold medals. Even taking the home field advantage into account, the outcome assured Korea’s potential in the world.

But the 2012 London Olympics sent us a special message. The Korean national team won 13 gold medals, fifth after the United States, the United Kingdom, China and Russia. The U.K. was the host, and the United States, China and Russia have populations of more than 100 million - tens of times bigger than Korea. Korea is the 106th largest country by area in the world, and our population is around 50 million. Winning more gold medals than Germany and France, the London Olympics was an opportunity to confirm that Korea is a developed country, at least when it comes to sports.

The triumph when the international attention was focused on Korea after economic development, democratization and the Korean Wave assured the fans of Korean pop culture around the world. Cultural consumers in the developed world may have been reluctant to enjoy the pop culture of a developing country.

But the Psy sensation that came immediately following the London Olympics was an “international certification” for Korea by the world.

But the Sewol ferry disaster has since stained that certification, so hopefully, Korea can recover its national reputation in the World Cup.