Raid finds no tunnels and no Yoo

Raid finds no tunnels and no Yoo 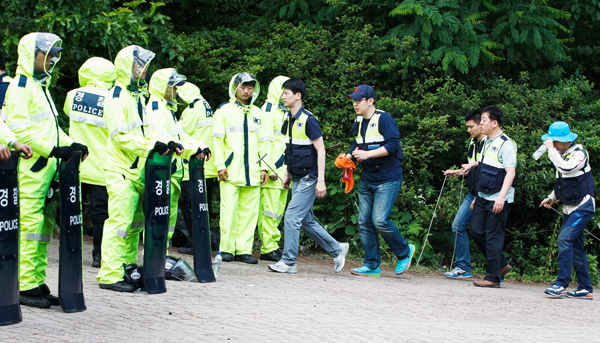 Investigators enter Geumsuwon yesterday to determine if there is any possible underground tunnel where Yoo Byung-eun, the elusive de facto owner of the operator of the sunken Sewol ferry, may have been hiding. [NEWS1]

Stretching into the second day of a raid on a religious retreat, a joint team of police and prosecutors yesterday sought to find a potential clandestine facility or underground tunnels that authorities believe could harbor Yoo Byung-eun, the de facto owner of the operator of the sunken Sewol ferry.

But the investigators failed to uncover any relevant subterranean premises. The police did not capture Yoo, who is currently on the run, however, they did manage to arrest one of his secretaries for helping him escape. That secretary was also a key aide, according to prosecutors.

About 3,600 police officers were dispatched to the compound called Geumsuwon, the headquarters of the Evangelical Baptist Church, in Anseong, Gyeonggi, as part of their prolonged efforts to locate the septuagenarian, a religious leader and the patriarch of the family that controls the Chonghaejin Marine Company, the operator of the Sewol.

Prosecutors said they were tipped off about underground tunnels or a bunker in the compound designed to cater to members of the Evangelical Baptist Church. “In most cases, a religious cult like the Salvation Sect would have a secret tunnel or underground area to evade arrest,” said a senior police officer who refused to be named.

The move comes a day after authorities arrested six followers of the religious sect on suspicions that they helped Yoo escape and obstructed police from executing their duty.

The first day of the raid on Wednesday was focused on arresting two key female aides who are believed to have played a major role in keeping Yoo out of authorities’ grasp, but that attempt ended in failure.

Some 200 adherents stayed at Geumsuwon, praying and delivering a speech critical of prosecutors’ investigations, though no major physical clash occurred. The believers have likened the search for Yoo to a witch hunt and maintain that the sect has nothing to do with the Sewol ferry disaster in April that claimed nearly 300 lives.

Not all sect members are supportive of Yoo’s escape, however, which has caused factional rifts among adherents as the manhunt for their religious leader has drawn out.

There are two major religious bodies in the sect. Members of one body reportedly advocate that Yoo should be brought to justice for the purpose of protecting the property and the sect itself. The second, whose name roughly translates as Layperson Evangelical Mission, claims adherents should help Yoo evade arrest.

Most of the followers who have been charged are known to have come from the latter entity. At the initial stage of the investigation, Yoo reportedly ordered Lee Jae-ok, his key aide, to disband the first group who attempted to distance themselves from Yoo.

The intensity of factional fighting was apparent on a free bulletin board on the official website of the religious sect, though it has since been closed.

For nearly two months, Yoo Byung-eun, the family patriarch, as well as his two sons have continued to evade arrest. Yoo’s first son is believed to be in Korea, while the whereabouts of his second son remain unclear.

Prosecutors allege the elder Yoo has been involved in different financial irregularities such as tax evasion and embezzlement. They also believe he is covering up unfair or risky business practices.

Yoo’s oldest daughter Som-na was arrested last month in France. She applied for bail, though the French court turned down her appeal yesterday.