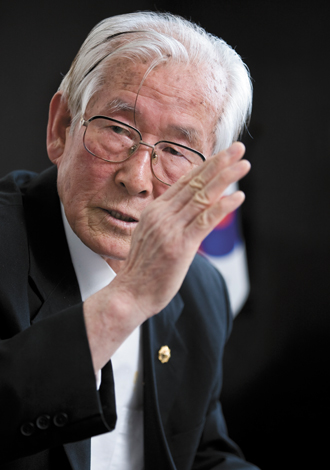 Park Tae-seung, 81, a military veteran, has spent years working to have the contributions of child soldiers in the 1950-53 Korean War recognized. By Kwon Hyeok-jae

In Korea, the month of June carries heavy significance. The nation’s Memorial Day falls on June 6, when the nation commemorates those who served in the military and died in combat. And on June 25, respects are paid to the soldiers who died fighting during the 1950-53 Korean War.

This year marks the 64th anniversary of the conflict. For those who survived it, it can be a particularly emotional time.

For veteran Park Tae-seung, 81, who resides in Punggi-eup, Yeongju, North Gyeongsang, this month is especially meaningful.

Park is the chief monk in the Punggi-eup Buddhist community, located in what is known as Simwu-won, an institution for the Buddhist community. Inside the building is a 132-meter (433-foot) Dharma Hall with a Buddhist altar. Korea’s national flag is perched on the left and 3,260 memorial tablets stand on the right.

The tablets are a record of the child soldiers who sacrificed their lives during the Korean War, from June 25, 1950, to July 27, 1953. The majority were 17 or younger.

Every day at 5 a.m. for the past 40 years, Park has chanted prayers over these tablets. Each patriot’s name, date of death, date of recruit, military serial number, class and troop are registered in a book.

Among the 3,260 young soldiers, 2,573 of them were recognized in 2011 by the Ministry of National Defense. And through Park’s personal research, an additional 687 were added.

The 81-year-old veteran was just 17 when he was recruited in August 1950. He entered the war starting with the First Battle of the Nakdong Bulge, a fierce engagement between the United States and North Korean forces. The assault was successful, and afterward, Park joined the battle to recapture Seoul and break through the 38th parallel to enter Pyongyang and North Pyongan Province.

But he and his regiment were soon forced to retreat south after Chinese Communist military forces infiltrated Korean territory after crossing the Yalu River during the night.

But even after the armistice in 1953, the young Park continued with his service in order to support a weakened military force.

His life is hard to discuss without considering the war. He lost his older brother, Tae-chang, who was four years his senior, in February 1951 during a battle at the Soyang River in Gangwon. And four numbers, 0625 - a reference to the beginning of the conflict - are always included in his cellphone number, his home number and his office number. The fighting is never far from his mind, and to assuage his feelings of guilt, he decided to help his lost comrades find peace after death.

So Park buckled down to regain the honor of the child soldiers lost. In 1996, he organized a community for former child soldiers and attempted to have the memory of those lost reinstated. Since 1998, he and his fellow comrades have jointly held a memorial ceremony every June. The ceremony will be held this year on June 20 in front of the Nakdong River Victory Memorial Hall in Daegu.

Park documented 741 fallen soldiers without family who were involved in the Battle of Dabu-dong, one of the Korean War’s bloodiest engagements, and enshrined them in 2001 in Daejeon National Cemetery. In 2003, he also placed the memorial tablets of 36,024 fallen wartime patriots in Daejeon National Cemetery with the help from a member of the National Defense Committee, Park Seh-Hwan, who is currently the chairman of the Korea Veterans Association.

“I submitted the petition to the government in 2008 to recognize the contributions of child soldiers,” Park said. “There was some interest on the issue for a while, but there was no official outcome.

“President Park [Geun-hye] also said in 2005 before her election that she will give national merit to child soldiers. It is a huge shame that we neglect their contributions even though current Korean society is based on their sacrifices.”

Q. You prayed every morning for 40 years over the 3,260 memorial tablets. That is not a short time.

A. Anyone who can wake up a little earlier than others can do this. I read Cheonsugyeong and Banyasimgyeong, the Buddhist terms, then pray for the spirits and chant Namuamitabul [a mantra for chanting and meditation] 10,000 times at the altar. It takes one and a half hours.

Did you stay here for 40 years?

No. The Dharma Hall was prepared five years ago. Before that, the memorial tablets were enshrined in my [residence]. It was not good enough to honor the fallen heroes. It took 20 years until the proper Dharma Hall was ready.

I’m sorry about your history.

I can’t imagine how my parents felt after they sent their two sons into war. I was in the eighth grade when I was recruited. I started the battle of life after the war to support my family. My parents suffered a lot from my brother’s death. Though I am over 80 now, I still feel like a child whenever I think of my parents.

It must pain you.

During my military service, my sister-in-law, my dead brother’s wife, was looking for parents. She said she would have a child with me to “carry on a family line” since the first son in our family, my brother, died. I pushed her away with tears. I did nearly everything to support my family. I blamed the whole world for doing this to me. Then, I met the Buddha 40 years ago.

Did you make peace afterward?

The monk Gang Suk-ju, the executive chief of the Korean Buddhist Jogye Order, enlightened me. I could be free from wondering why I should be the one who suffers. He gave me the Buddhist name Seo-ju, which means “the ship that sails to heaven.” After I received the name, I decided to lead my dead war brothers to peace by praying for them. I decided to do something honorable and right.

Was there any decisive motivation for your decision?

During the war, when our troops were retreating from an attack by the Chinese Communist military, a 15-year-old fellow soldier got shot in the leg. He pleaded for me to kill him, saying he couldn’t walk anymore. I didn’t even know his name. I squeezed my eyes shut and pulled the trigger. Since then, I have lived my life with guilt.

It is not a problem for which you should feel responsible.

It is a matter of sympathy. About 30,000 boys and girls under the age of 18 who didn’t have to perform obligatory military service participated in the battle, and more than 3,000 died. Some might say that they answered the country’s call, but actually they were forced to. Most of them were from poor families. I’ve never seen a wealthy child from a powerful family in the army. If I was born as the son of someone in a high office, I may not have gone through all this.

How many child soldiers survived the war?

The number is estimated to be between 6,000 and 7,000. About 950 of them are members of our community. ... The Ministry of National Defense insists that recruitment was legal. But there was no ordinance during the war that allows the military recruitment of children under 18. I am not trying to point out historical faults ... I am just saying that we must recognize their contribution and pay proper compensation. Their spirit of sacrifice must be known to our children in the future.