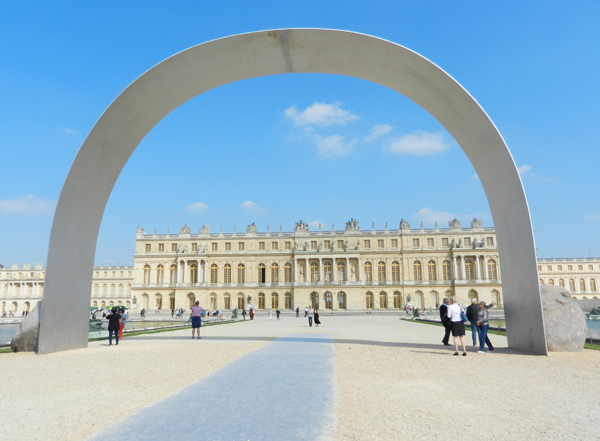 For the last few years, visitors to Versailles have encountered contemporary works such as Takashi Murakami’s pop art sculptures and Joana Vasconcelos’ humorous installations, which harmonized with the old Baroque-style French palace.

From today until Nov. 2, visitors to Versailles will see large stones and metal plates scattered here and there. At a glimpse, they might seem carelessly placed, but careful observers will note that they create an elaborate tension with their surroundings.

They are works by Lee Ufan, 78, a Japan-based Korean painter and installation artist who led the 1970s Mono-ha, or School of Things, movement in Japan. Lee often simply arranges basic materials in blank space to bring out tension between the artificial and the natural, while showing Zen-style aesthetics unique to East Asia.

Lee is the seventh contemporary artist to be invited to hold a solo show at the chateau. Pointing out that Versailles’ 17th-century garden designer Andre Le Notre was a modernist and “can lead us on the path of minimalism and to the notion of void,” Catherine Pegard, president of the Palace of Versailles, wrote in the exhibition’s introduction, “In light of this, bringing Lee Ufan’s vision to Versailles seemed appropriate - it is less disconcerting than we believe and draws us into his silent and captivating poetry.”