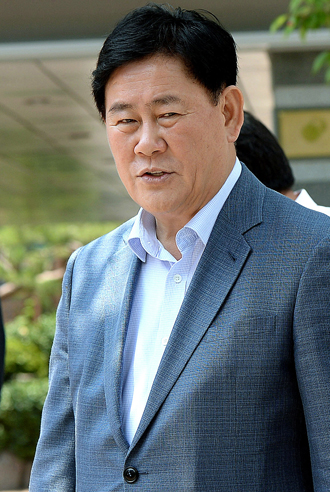 After Choi Kyung-hwan, nominee for the double post of deputy prime minister for the economy and finance minister, hinted at easing the debt-to-income (DTI) and loan-to-value (LTV) regulations for mortgage loans in an attempt to stimulate the real estate market, there has been a mixed response from the construction industry, financial sector and government.

Since it is the first message from the nominee as the country’s next economy chief, many are paying attention to it in a bid to prejudge his future policies.

The DTI ratio, introduced in 2006 by the Roh Moo-hyun government to cool down an overheated market, determines the maximum amount of loans a person can take out to buy a house based on annual income. It currently stands at 50 percent in Seoul, 60 percent for metropolitan areas in Gyeonggi and 40 percent for the districts of Seocho, Gangnam and Songpa, where speculation is rampant.

The LTV rate is a gauge used by banks to determine the amount of a home-backed loan based on the market value of the house. The rate varies by city, but the average is 50 percent for Seoul and its metropolitan area and 60 percent in rural regions.

The Financial Services Commission has been conservative about easing the rules due to record-breaking levels of household debt.

The financial authority’s primary concern is that if the ratios are increased, consumers will be able to take out more loans without additional collateral, but their inability to pay back the loans might lead to bankruptcies of both households and financial institutions.

The country’s total household debt stood at 1,024 trillion won ($1.002 trillion) as of the first quarter of this year, according to Bank of Korea data. About 422 trillion won was mortgages from banks and nonbanking financial institutions.

FSC Chairman Shin Je-yoon has said the LTV and DTI rules are not for boosting the market but protecting households.

“There may be some fine-tuning of the regulations, but increasing or decreasing the rates is not desirable,” Shin said in a report to the National Assembly in April.

However, the FSC’s stance may change with the arrival of a new finance minister.

“The commission will review the nominee’s remarks thoroughly and discuss measures,” said an FSC official.

Government branches are divided over the issue. The Ministry of Strategy and Finance also has been negative about loosening the rules.

A Korea Development Institute report said last month that easing the LTV regulation at the moment could send household debt surging and burden the macroeconomy.

However, Seo Seung-hwan, minister of land, infrastructure and transport, who survived the latest cabinet reshuffle, also has hinted at relaxing the real estate regulations and is expected to collaborate with Choi in easing the LTV and DTI regulations

“If the rules are eased, there will be a temporary effect on the market,” said Park Won-kap, a real estate analyst at Kookmin Bank. “But that may be a boomerang for the economy, which would help spike household debt and cause the fiscal soundness of financial institutions to deteriorate.”

“International organizations say the possibility of Korean household debt being transferred to financial institutions is very low because of existence of the regulations,” said Lee Jun-hyup, a researcher at Hyundai Research Institute. “But if revisions are needed, that should be considered at a level that doesn’t affect the soundness of the financial industry.”

On the other hand, the construction industry welcomed the remarks by the nominee.

“Even if the DTI rule is completely lifted and the government lets financial institutions autonomously determine the ratio, there wouldn’t be problems,” said an official at the Korea Housing Association.

“Since the housing environment has changed quite a lot, there can be greater positive effect,” said Yoo Koo-hyun, a senior executive at a commercial bank. “Given that the benchmark interest rate is not likely to go up rapidly, the household debt problem would not be a serious problem, as some worry.”

Early last year, the Park Geun-hye government announced measures to ease loan regulations imposed by the Roh Moo-hyun administration to revitalize the moribund property market, which has been a major drag on the country’s economic growth.

For people who take loans from the National Housing Fund, the DTI regulation was lifted until December. The LTV rate for those borrowers was raised to 70 percent.