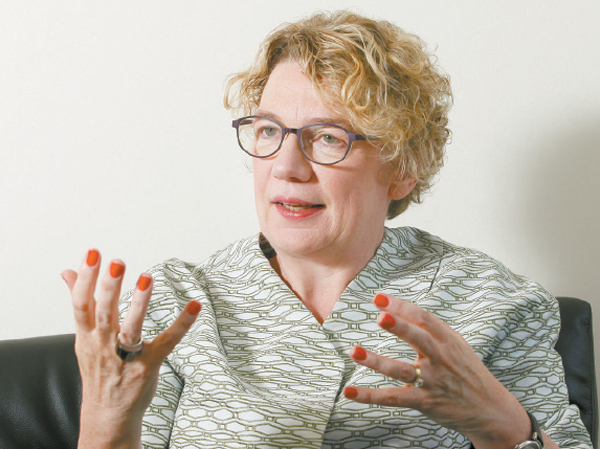 Aingeal O’Donoghue, the Irish ambassador to Seoul. By Park Sang-moon

According to Aingeal O’Donoghue, the Irish ambassador to Seoul, Northern Ireland’s peace process can serve as a valuable example for the reunification of the Korean Peninsula.

“One of the projects we pursue here relates to the possibilities of sharing lessons or experiences from the Northern Ireland peace process in Korea, though recognizing that the two situations are very different,” the top Irish envoy, who is accredited to both North and South Korea, said on Tuesday at the embassy in central Seoul.

O’Donoghue, like her predecessor Eammon McKee, was also involved in the peace process with Northern Ireland under the British government.

Before being posted in Seoul last August, her first time here, she served as permanent representative for five years to the European Union in Brussels, where she served in the Irish EU presidency.

“We don’t think what happened in Northern Ireland and on the Island of Ireland offers an easy answer,” she said, but added it “potentially offers some things of interest.”

This includes the lengthy negotiation process and comprehensive approach taken, that there were outside actors to help facilitate the negotiation at times, and that the Irish diaspora - the Irish community abroad - also played a role in the process.

Other areas of interest include the building of North-South cooperation and how to facilitate reconciliation between communities after many years of separation.

“While the island of Ireland never had a border or a barrier like the Korean Peninsula, there was very little contact between two parts of Ireland for many years,” she said. “One of the elements of the peace process that has really borne fruit was developing these relations between Ireland’s north and south.”

In February, the Korean Ministry of Foreign Affairs launched the Peninsula Club, an organization made up of 21 foreign envoys to both South and North Korea, of which O’Donoghue is a part. The consultative group holds regular meetings and serves as a networking platform that will lay the foundation for the global community’s support for the reunification of the Koreas.

“I did have some engagement with the Foreign Ministry in North Korea around this,” O’Donoghue said of the Northern Ireland peace process. She described Pyongyang’s response as “more cautious.”

“They do have mechanisms for looking at other conflict situations, but their focus, I think, is much more on them relying on themselves,” she added.

But there have been a number of engagements between the embassy and the Ministries of Unification and Foreign Affairs, including a delegation from Ireland coming to Korea and a Ministry of Unification official visiting Ireland.

“[South Korean officials], of course, are looking at many other situations as well, most notably Germany, but some of the Eastern European countries also offer interesting examples of post-conflict societies,” O’Donoghue said.

Last year marked 30 years of diplomatic relations between Ireland and South Korea and the 60th anniversary since the end of the 1950-53 Korean War. A memorial for those of Irish birth and origin who died during the war was unveiled in April 2013 in Yongsan District, central Seoul. At the time of the conflict, Ireland was not a part of the UN Forces Command.

It was “quite a task to bring out that story of the Irish contribution, but we’ve been really heartened by the way in which the Korean administration and the Korean people have recognized this,” O’Donoghue said.

Richard Bruton, the Irish minister for jobs, enterprise and innovation, is scheduled to visit Seoul at the end of the month. This is the first time Ireland’s enterprise minister is coming to Korea.

“I see quite a lot of overlap and commonality between President Park [Geun-hye’s] efforts to promote a creative economy here and Ireland’s smart economy approach, which is around ICT, bio-science, and research and development. So we see lots of potential exciting opportunities in all these areas,” O’Donoghue pointed out.

“As Ireland has successfully emerged from our EU IMF program, which we exited at the end of last year, our government is very much looking at Asia as a partner for the future. Traditionally our trade and investments were very much with Europe and the U.S., but we are very much looking to expand our operations in Asia.”

O’Donoghue added that she would like to bolster people-to-people contact in Korea. There are around 900 Irish citizens in the country, many of them young people working as English teachers. In Ireland, there are approximately 1,000 Korean citizens. As many as 600 Koreans to go to Ireland each year, many on working holiday visas or with the intent to learn English. “Many people say to me here that there are similarities between the people of Korea and the people of Ireland,” O’Donoghue said. “There is a sort of a sensibility, maybe an emotional quality that is quite similar.”