On a 5-game win streak, Rockies run into Ryu

On a 5-game win streak, Rockies run into Ryu 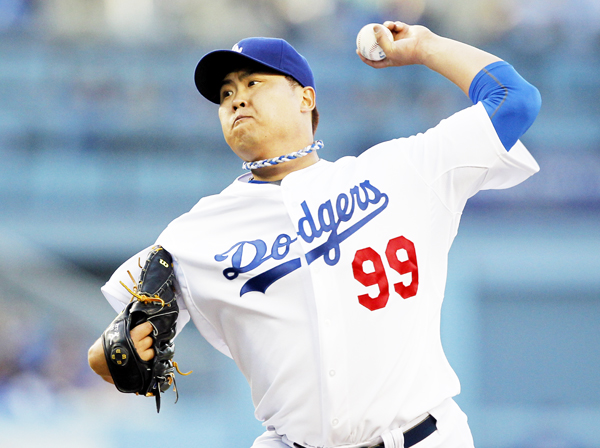 Ryu Hyun-jin delivers a pitch in the top of the first inning against the Colorado Rockies on Monday at Dodger Stadium in Los Angeles. The left-hander picked up his eighth win with six solid innings of work.[AP/NEWSIS]

Ryu Hyun-jin of the Los Angeles Dodgers stopped the Colorado Rockies’ winning streak at five yesterday with a strong outing at Dodger Stadium.

The 26-year-old yesterday picked up his eighth win of the season, allowing one run on three hits, including a home run, in a 6-1 win. He recorded six strikeouts over six innings.

“I’m satisfied with my performance today,” Ryu told Korean media after the game. “The speed of my fastball was good and holding the Rockies’ leadoff hitter [Charlie Blackmon] and Troy Tulowitzki hitless helped me to not allow many runs tonight.”

He had a tough first two innings. After retiring Blackmon on two pitches, Ryu walked Brandon Barnes on a full count and allowed a two-out double to cleanup hitter Justin Morneau that bounced over the wall in right center field, forcing Barnes to stop at third base. He then struck out Drew Stubbs to end the threat, but ended up throwing 25 pitches in the inning.

In the second, Ryu allowed a leadoff double to Willin Rosario, but retired the next three hitters. After two innings, his pitch count was 44.

Ryu threw just 10 pitches in the third, and the Dodger offense started to come alive in the bottom of the inning thanks to a rocky Colorado defense.

Dee Gordon led off by lining down the third-base line into the corner for a triple that was turned into an inside-the-park home run when left fielder Blackmon booted the ball twice. After Hanley Ramirez walked and Yasiel Puig singled, Matt Kemp plated Ramirez with a single to shallow left field to make it 2-0.

In the fourth, Rosario touched Ryu for a two-out home run.

Ryu then retired the next seven hitters he faced, leaving the game after throwing 105 pitches.

Ryu said he has added a new weapon since the game against the Cincinnati Reds on June 12.

“I started throwing cut fastballs,” he said. “I mostly use them when I face lefties. The last pitch I threw tonight was a cutter. I thought it was necessary to make some changes to my pitching repertoire, and it has been working out pretty well. I still consider that pitch as a high-speed slider, though it tails like a cutter. I learned the grip from pitching coach Rick Honeycutt when I was sidelined with an injury.”