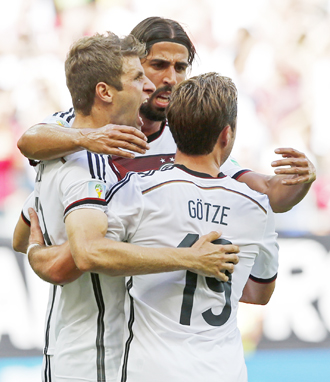 Germany’s Thomas Mueller, left, celebrates with Mario Gotze after scoring the opening goal during their Group G match against Portugal at the Arena Fonte Nova in Salvador, Brazil, Monday. [AP/NEWSIS]

Billed as a clash of European heavyweights, the Germans ignored the soaring Salvador heat to deliver a sizzling attacking display against a disappointing Portugal, effectively ending the Group G game as a contest by halftime.

Portugal could not cope with the pace and movement of their much more organized and fitter-looking opponents and were 3-0 down by the interval as Mueller, marking his 50th international, scored either side of a thumping Mats Hummels header.

“Three goals in one match, in the opening match against such an opponent is just great,” Mueller, whose side is bidding to end an 18-year title drought, told reporters.

“We got into the match really well and had some half chances then suddenly we were ahead 2-0. In heat like this, a lead like that is a great advantage.”

Portugal Coach Paulo Bento had feared the likely impact of the lunchtime heat, but his game plan failed to match the Germans’ who went for a fast start before energy levels fell, with interchanging forwards Goetze, Mueller and Mesut Ozil causing havoc.

“We dominated the first half in the midfield with fast through balls to the strikers. We were clinical in finishing our chances, we had four goals from about six chances,” Germany Coach Joachim Loew told a news conference.

In their 100th World Cup match, the first team to reach the milestone, Germany was in the mood to party and went 1-0 up on 12 minutes through a Mueller penalty after the clever Mario Goetze wriggled away from Joao Pereira and was hauled down.

Hummels, who later limped off with an injury, powered home the second from a corner on 32 minutes before Mueller, top scorer in the 2010 World Cup, stole in ahead of a sleepy Bruno Alves to smash in the third in first-half stoppage-time.

The task was made even harder for Portugal by a needless 37th-minute red card for Pepe. The defender, furious at what he felt was “simulation” by Mueller following a slight collision between the two, was sent off for pushing his head into the German’s as he sat on the ground.

Much had been made of his inclusion after injury problems and although he began the day with wild screams meeting the mere mention of his name, jeers soon rang out as his infrequent touches came to little - a parried free kick his best effort. 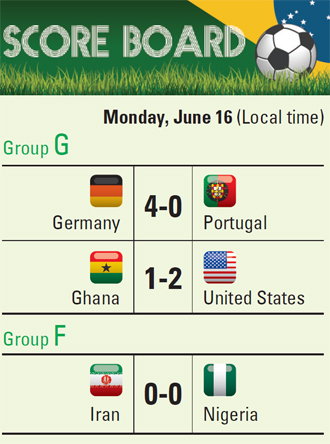 With German Chancellor Angela Merkel watching in the crowd, it was Mueller who enjoyed the crowd’s appreciation, completing the first hat-trick of the tournament after 78 minutes when he prodded home a spilled Andre Schuerrle cross. It was only the second hat-trick of the last three World Cups.

Portugal’s best chance was a first-half Nani shot that narrowly fizzed over, while substitute striker Eder had a decent penalty shot denied after colliding with Benedikt Hoewedes.

The impressive victory extended Germany’s run of having won every opening World Cup match since 1990 and they have scored at least four goals in five of those seven games.

For Portugal, which had only conceded once in their previous six World Cup group games, the defeat left qualification in the balance with games against the U.S. and Ghana to come.

“We have to analyze this in all calm,” Bento said.

“For us the game was over by halftime and although we tried a bit in the second half, we didn’t show much either. Germany controlled the game by holding the ball and the two decisions [penalty and red card] threw us out of balance.”

Meanwhile, Substitute John Brooks headed an 86th-minute winner as the United States beat Ghana 2-1 in a World Cup Group G clash on Monday, just as the Africans thought they had snatched a draw.

U.S. captain Clint Dempsey scored after 32 seconds, the fifth-fastest goal in World Cup history, and that began to look enough as Ghana repeatedly failed to turn their dominant possession into clear chances.

The Africans did finally equalize after 82 minutes, though, when a clever flick by Asamoah Gyan set up Andre Ayew for a neat finish, only for Brooks to thump home the winner four minutes later.

Ghana knocked the United States out in the Round of 16 four years ago and effectively did so in 2006 when they beat them in their final group game, but now look like long shots to progress again from a group containing Germany and Portugal, who met earlier on Monday with Germans winning 4-0.