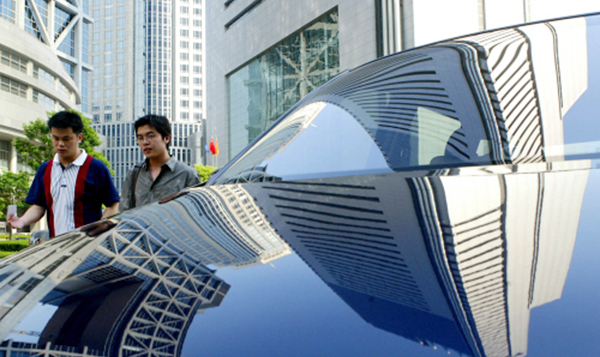 Chinese youths walk past a car with a reflection of new commercial buildings in Shanghai. The local government has taken measures to cool down property speculation. The measures include: tightening credit to builders, raising down payments, banning new villa projects and shifting construction to suburbs. [REUTERS/NEWS1]

China’s infamous “ghost cities” are even scarier than they sound.

As home prices across China have fallen 10.2 percent in the first five months of this year, property developers are showing signs of panic. Now they seem to be drawing their inspiration from Angelo Mozilo. Like the former head of Countrywide Financial Corporation, they’re doing their worst to evade regulations meant to tamp down on property speculation, and have even started offering no-money-down loans to China’s 1.3 billion property-obsessed citizens. When you consider how badly such schemes ended for Countrywide, and ultimately the U.S. economy, you begin to understand why this is such a chilling development.

More and more economists are warning that China could be approaching a “Minsky moment.” That’s when a speculative boom comes to a sudden and nasty end as debt accumulation outpaces cash flow. In truth, no one really knows how bad the situation in China might be right now given how rapidly the country’s vast and opaque shadow-banking system has grown.

When China bulls explain why the world shouldn’t worry about mainland finances, they often cite the requirement for a 30 percent down-payment on real estate. But as Bloomberg News reported on June 13, deals skirting those conventions are starting to appear from Guangzhou and Shenzhen in the south to Beijing in the north. This is adding to risks for property companies, lenders and an economy already heading for the weakest growth in 24 years.

A failure to regulate America’s nondepository banking system is what undid the world’s biggest economy in 2008. China’s own shadow-banking monster is estimated at $7 trillion and encompasses many nontransparent financing vehicles that developers or third parties use to arrange funding to cover down-payment requirements. The overwhelming odds are that this dodgy sector is much bigger than anyone knows, including Xi’s economic-restructuring team. It could be significantly larger than China’s $8.2 trillion economy.

In a world obsessing about too-big-to-fail banks, China’s entire economy could be too big to save. Well, bulls say, what about those $4 trillion of currency reserves? China would be hard-pressed to deploy those funds for bailout after bailout, each of which would dwarf the $85 billion lifeline the United States threw at American International Group. The moment traders got wind of the fire sale in Beijing, markets would crash and U.S. yields would skyrocket. China would suffer an unimaginable paper loss - and a more tangible one for its export-reliant economy.

To its credit, the government is warning consumers to beware of too-good-to-be-true housing pitches. But the clampdown is cosmetic at best. As long as the real focus in Beijing is on meeting the official 7.5 percent annual growth target, the odds that authorities will choke off all these financing shenanigans are slim. Subprime lending has become both a way to fuel economic activity and to convince Chinese families that their wealth is rising enough not to challenge the Communist Party. It’s delaying an economic, and possibly a political reckoning.

This kind of willful blindness means China’s eventual crash could be even bigger and more spectacular than it might be otherwise. Those who insist that Xi is doing his best to control the situation are ignoring official data, which show new yuan loans exceeded forecasts at $140 billion in May (and “official” means the true figure is certainly higher).

The reason China’s balance sheet is such a risk to Washington, Tokyo and beyond is that we just don’t know how bad it is. Murky reporting infects all sectors of the economy. At the huge port in the northeastern city of Qingdao, traders were recently accused of using the same aluminum and copper stockpiles as collateral for multiple loans. Instead of adjusting to international norms of transparency and accounting, China is becoming even more of a black box as Xi clamps down on the foreign media.

In April, former Finance Minister Xiang Huaicheng let slip that local governments may have accumulated more than $3.2 trillion of debt, almost double the figure given in a 2011 report by the National Audit Office. In Hong Kong, where it’s harder to censor financial information, regulators are scrambling to impose strict controls on mainland borrowing.

If the world learned anything from Wall Street’s near-death experience, it’s how fast risky actions in one sector spill over into others. The U.S. mortgage-frenzy quickly devolved into farcical offerings like “no-doc” loans with dodgy documentation requirements and “interest-only” contracts with no initial principal payments. As China makes the same mistakes, Xi may find China headed for a hard landing - and quite suddenly so.