Bartender brings a bit of Korean flavor to a global competition

Bartender brings a bit of Korean flavor to a global competition 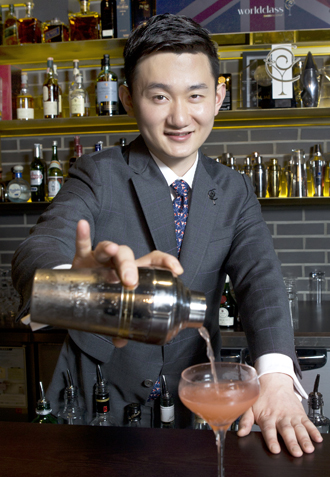 Bartender Park Sung-min, who won the local mixology competition by Diageo Korea, prepares a cocktail at LeChamber. By Park Sang-moon

Park Sung-min, the manager at Le Chamber, is a man who doesn’t shy away from a challenge.

Late last month, the 36-year-old bartender, who has about 10 years’ experience making cocktails, won the Diageo Reserve World Class Korea mixology competition, which singled out the best bartender in the country. The contest was organized by Diageo Korea, the local unit of the London-based spirits producer, and Park was one of 150 bartenders who competed, reaching the final 10 and then ultimately taking first place.

“It’s my sixth time participating in the event,” Park said on a recent afternoon at Le Chamber, the bar where he works, in Cheongdam-dong, southern Seoul. “The first contest was in 2009, and that was the first time I participated.

“I decided to participate out of curiosity, and surprisingly, I made it to the top 10, which gave me hope that if I practice more, then I’d be able to become a final winner someday.”

Park has taken top honors in Korea’s competition for two consecutive years now. Last year, he went on to the 2013 World Class Global Final, where he was up against approximately 50 bartenders, though he failed to place.

The local finale to choose the best bartender in Korea was held May 22 at Vanguard, a club in Samseong-dong, southern Seoul, in which the two contestants left standing in the last round were tasked to prepare six cocktails in six minutes in a speed challenge.

Park emerged victorious after his drinks and knowledge were judged to be superior. As the winner, he will participate in the 2014 World Class Global Final from July 27 to Aug. 1 in London. No Korean bartender has yet won the world challenge.

Q. What made you stand out from other competitors in the local contest this year?

A. There are many criteria on which we are scored by the judges, including knowledge, technique, creativity and service. Although I’m not sure about what score I received in the finals, I believe what made me different was my service mind. There was one challenge in the top 10 competition where you were required to make three of the 15 different classic cocktails randomly and serve them to the judges as if you were telling a story. I think other bartenders were a little bit nervous. As for me, I wasn’t sure which three cocktails I would be required to serve them, so I prepared stories for all 15 classic cocktails.

What differences did you see in the local and global World Class contests?

There are a lot of differences. I would say that in Korea, there are only a few talented participants. I always imagined what it would be like if there were more competent participants for the local contest. As for the global one, there are no words. The best bartenders from each country are participating, so it’s highly competitive. There is so much to learn just by participating in the contest. The environment in the global contest is different from the local one in that here you are required to make cocktails on a stage with music and a screen. The global contest, however, is carried out in an environment of an actual bar. This makes judging criteria, like service and your relationship with customers, more important.

How will you make yourself stand out in the London contest?

What I prepared last year was a traditional mat from Korea. I thought that it would be boring to make cocktail inside a bar and serve them to the judges. I wanted to create a new environment for them so that they’re able to experience something new. But I wasn’t able to realize this idea because I didn’t make it to the next round. This year, I’m hoping that I’ll be given the chance. This year, I will also use unique ingredients from Korea.