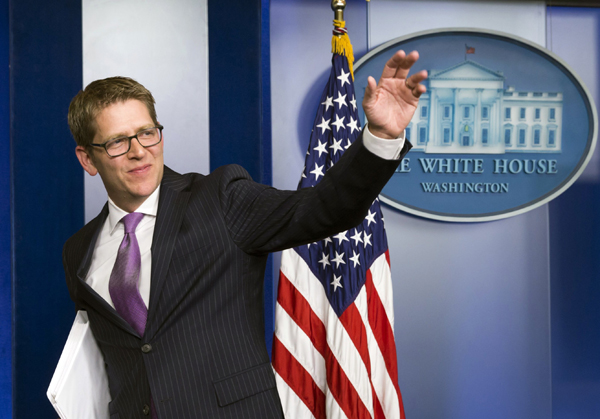 “Motor Away,” by Guided By Voices, was playing in the briefing room of the White House as U.S. Press Secretary Jay Carney appeared. White House staff prepared the song for his last press briefing.

“I just want to say thank you to all of you here,” Carney said. “This has been an extraordinary experience ... The press secretary is in a unique position within the White House, and not just because I’m a former journalist - because I think every press secretary understood this and understands it - we work to promote what the president is doing and the message he’s trying to convey to the American people. But I also work with the press to try to help you do your jobs, to help you cover the White House, cover the administration and report on what we’re doing here.”

At the end of the briefing, Chief of Staff Denis McDonough told him he would be missed. The White House correspondents applauded.

Admittedly, American politics is a mess. Serious strife exists among politicians in Washington, so much so that their disagreements once resulted in a federal government shutdown. However, there are moments that remind us how America works. Americans value people. When a White House aide or a secretary resigns, the president holds a news conference and lauds their accomplishments. On May 30, President Barack Obama made an unexpected appearance in the briefing room to announce that Carney was to resign after serving three years as White House press secretary. When Obama appoints a new secretary, he will explain in detail why the decision was made, no matter the situation.

In Korea, the cabinet reshuffle has become a vicious battle. A respected prosecutor turns out to be a greedy man, and a reporter who has been writing for decades is criticized for being pro-Japanese. The verification process has become the sharpest sword in an ideological battle.

But what makes the crisis even more serious is the Blue House’s silence. Whenever a nomination becomes controversial, it remains quite. Nominees and appointees have been harshly attacked and forced to resign, but there must have been reasons for the appointment in the first place. If there are faults, apologies should be made. If the person is suitable for the job despite his or her flaws, the Blue House should take responsibility for its choice.