An archetypal memorial for a national teacher

An archetypal memorial for a national teacher 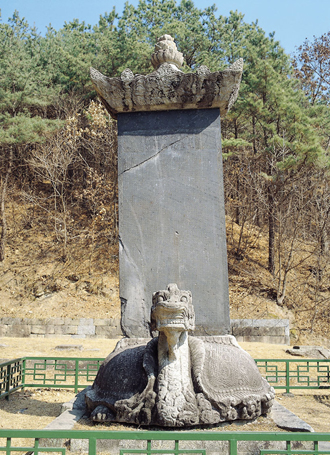 A memorial stone, dedicated to National Preceptor Jigwangdaesa, is located on the Beopcheon Temple site.

When the teacher passed away in 1067, the 21st year of the reign of King Munjong of Goryeo, the king ordered a stele and a stupa to be erected in commemoration of his services.

The stele was completed in the second year of the reign of King Seongjong of Goryeo (1085). The stupa was later moved to Gyeongbok Palace .

Only the stele remains at its original location. The body of the stele with an inscription stands on a tortoise-shaped pedestal and a crown-shaped capstone is placed atop its body. Clouds and twin dragons, which are carved both elaborately and realistically on each side of the stele’s body, are also worthy of note.

With its well-balanced shape, unique capstone, and outstanding sculptural workmanship, this stele is a representative example of Goryeo’s memorial stones.