Yoo’s wife questioned after her arrest

Yoo’s wife questioned after her arrest 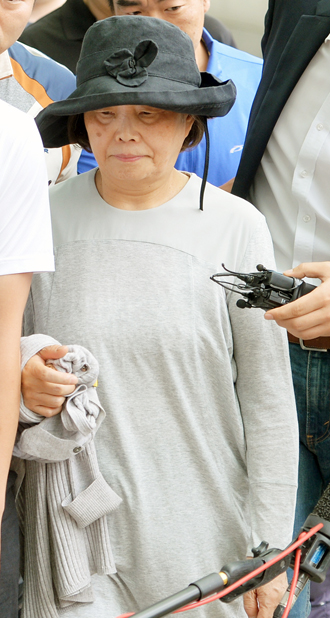 Kwon Yun-ja, the wife of Yoo Byung-eun, walks into the Incheon District Prosecutors’ Office on Saturday for questioning. [NEWSIS]

A joint team of police and prosecutors grilled the wife of the fugitive de facto owner of the sunken Sewol ferry’s operator after it arrested Kwon Yun-ja on Saturday over suspicions that she embezzled corporate funds to help her son evade arrest.

Both her husband, Yoo Byung-eun, and her eldest son Yoo Dae-gyun remain on the country’s most wanted list on charges that they allegedly mismanaged the Chonghaejin Marine Company, the operator of the ship. The two men also stand accused of various financial irregularities.

Authorities said Kwon appeared to be keeping contact with her eldest son, though she didn’t contact her husband as frequently as her son.

The arrest is the latest in a series of prolonged efforts to pursue the two fugitives and apply pressure by arresting their family members and close aides.

So far, six family members and relatives - including the older brother of the 73-year-old Yoo - have been detained or questioned over their potential connections with him.

Kwon, 71, was apprehended in an apartment in Bundang, Gyeonggi. Yoo and their oldest son were nowhere to be found, however, according to the investigation team.

Investigators said they also found 110 million won ($107,684) worth of cash in her room, which was apparently going to be used to aid the men in their escape. Also found were notes and her cellphone.

In addition, two women who are presumed to be members of the Evangelical Baptist Church, the religious sect founded by the elder Yoo, were present at the residence.

The head of a direct sales affiliate, Dalgubeol, Kwon is suspected of having siphoned off company money to fund the two men’s escape. She is also accused of tampering with funds reserved for missionary work by the Evangelical Baptist Church.

Kwon is currently being detained for further questioning, as investigators assume she may hold clues about the whereabouts of the two suspects.

During the investigation, prosecutors found that Kwon stayed in contact with her son Dae-gyun even while he was avoiding investigation.

Investigators believe that Kwon’s arrest may persuade Yoo and his son to turn themselves in. The search for the elder Yoo and his son picked up momentum after two key adherents were arrested earlier this month. The two female suspects, in their 60s and 50s, provided testimony that led to the eventual arrest of Oh Gap-ryeol, a brother-in-law of Yoo Byung-eun.

The women said that Oh, a former ambassador to the Czech Republic, drove Yoo out of the religious sect’s official compound, known as Geumsuwon, on April 23 after police surrounded the vicinity.

“When we questioned Oh, he testified that Yoo’s family and followers funded and gave him information about the authorities’ movements,” said a prosecutor, who spoke on condition of anonymity.