For Chinese, Jeju a ‘cheap destination’

For Chinese, Jeju a ‘cheap destination’ 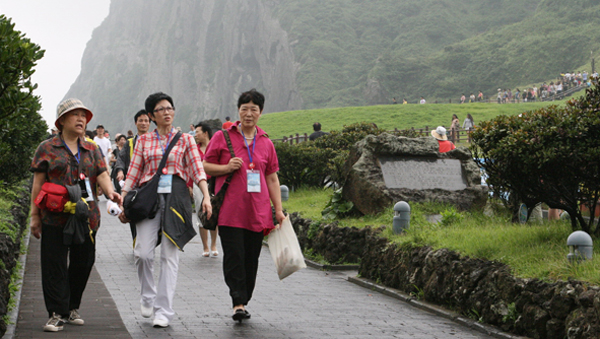 Last weekend, I went to Jeju Island with a delegation of young Chinese civil servants. There, a man we called Mr. K accompanied the group as a Chinese interpreter and guide. When I asked him how the tourism business was, he responded, “It’s getting harder and harder.”

“A company owned by a Korean-Chinese man has taken up 80 percent of the group tourism market. They are ‘buying’ the tourists. Two, three years ago, my company used to have 10,000 tourists a month. Nowadays, we get less than 2,000,” he said.

Mr. K explained that the practice of “buying” Chinese tourists was known as “Youke.”

A five-day tour package to Jeju is sold for 3,500 Yuan in Shanghai, which is about 573,000 won ($561). The travel agency in China levies a fee for flight costs, about 300,000 won, and sends the rest to a tour operator in Korea. The tour operator then arranges accommodation, meals, transportation and admission fees, which add up to about 250,000 won. It incurs a loss, considering the guide fee and the operational cost. The tour operators make money by taking a commission from shopping.

However, when Koreans in China entered into the market, the structure was broken. They began to pay the Chinese travel agencies to send tourists to their businesses. Mr. K said that these companies pay 700 yuan per customer, about 120,000 won, to the companies in China. “This is nothing but buying the tourists,” he said.

“In order to get 400,000 won in commission from shopping, each tourist must buy at least 1.2 million won worth of merchandise.

Some unlicensed Korean tour guides pressure tourists to shop, and they aren’t provided with proper accommodations or decent meals. The more tourists that visit Jeju Island, the worse the island’s image becomes. The monopoly becomes more serious, and other small tour operators struggle. And Korean companies complain that even when Chinese tourists increase, the money circulates among the Chinese.

However, the municipal authority is neglecting the distortion in the market and are only interested in boosting the number of visitors. Unlicensed tour guides are loosely controlled and crackdowns are leaked in advance.

After introducing Jeju’s beautiful natural scenery, Mr. K returned to his seat and said, “In China, there are tour packages that sell for 998 yuan now. Chinese companies make more money if they send more tourists, so they lower the price even more. Jeju is becoming a cheap destination.”