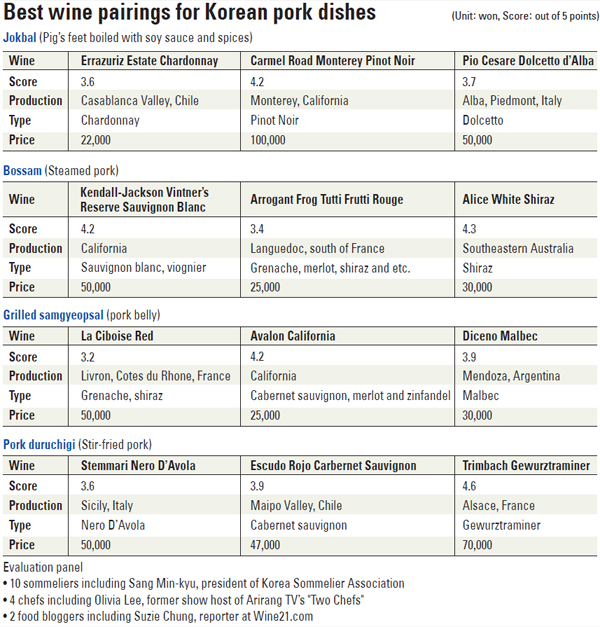 As Koreans have begun to show a preference for liquors with lower alcohol content, imports of red wine increased 17 percent last year, and white wine imports jumped 14.3 percent in the same period, according to the Korea Wines and Spirits Importers Association.

As the trend continues, people are becoming more open to the types of wine that they will consume and when they will drink it, even combining wine with traditional Korean pork dishes.

Since pork is the most favored and frequently consumed meat in Korea, the JoongAng Ilbo wine consumer panel held an evaluation late last month at Winenara, a private wine academy in Seocho-dong, southern Seoul, to pick wines that go best with pork.

The panel, made up of 16 professionals - 10 sommeliers, four chefs and two food bloggers - picked the nation’s best pork-based foods and tried them each with three wines.

The first dish that arrived on the panel’s table was jokbal with salad and ssamjang, traditional soybean paste mixed with red pepper paste. The California-based Carmel Road Winery’s Monterey Pinot Noir was picked as the best match.

“The wine’s moderate taste of tannin [which makes a dry taste] and sourness make harmony with the chewy texture of jokbal,” said Son Sung-mo, manager and sommelier at local hotel The Classic 500. “The mixture of the two tasted clean and harmonized well, like the combination of sashimi and wasabi-soy sauce mix.” 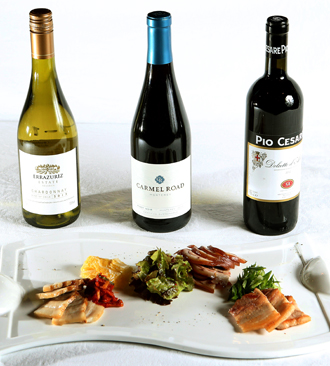 Bossam, a dish of sliced steamed pork served with radish kimchi and salted cabbage, was next on the table. The panel picked the Australian red wine Alice White Shiraz as the best pairing.

“With a sip of red wine, my hands kept moving to the soft bossam wrapped with crispy kimchi,” said Sang Min-kyu, president of Korea International Sommelier Association. Other experts said that the wine harmonized even better with the radish kimchi and salted cabbage than the steamed pork slices.

Kendall-Jackson Vintner’s Reserve Sauvignon Blanc, a white wine from California, also received a high score in the pairing, only 0.1 point behind Alice White. The panelists noted that its moderately acidic taste balanced well with the fatty steamed pork.

As the best match for grilled samgyeopsal, Korea’s most popular pork dish, the experts chose Avalon California, a wine that is made with a large portion of cabernet sauvignon.

“The wine’s taste was relatively strong, but its sweet finish was soft with the greasiness of grilled samgyeopsal,” said Son, from The Classic 500.

Pork duruchigi was the most heavily-seasoned dish of the day, but the panelists unexpectedly concluded that French white wine Trimbach Gewurztraminer tasted the best with the spicy and salty pork stir-fry and it recorded the highest mark.

“The delicate flowery scent from the wine succeeded in offsetting the strong spicy and salty tastes,” said Park Hyun-jin, chief director at Seoul-based wine restaurant Dugahun. “It was a white wine, but the taste didn’t get buried by the spicy seasonings.”

As Park commented, other panelists also nodded in agreement that the Trimbach had a stronger spice fragrance than other white wines, which contributed to its balance with strong Korean seasonings.

“Wine shows different tastes depending on what kind of food you match it with. So there are countless ways to match it with all kinds of dishes,” said Kim, from Westin Chosun. “I realized that pork-based Korean dishes could be an unexpected but great match with wine.”