Soldier shoots himself, is captured

Soldier shoots himself, is captured 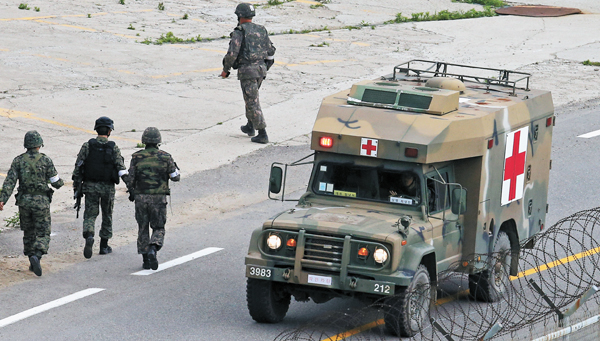 A military ambulance carries an Army sergeant who shot himself in the upper chest yesterday in a suicide attempt after a daylong standoff with the military on a mountain in Goseong County, Gangwon. The 22-year-old soldier fled after a shooting spree Saturday evening that killed five and injured seven fellow soldiers. [NEWS1]

A Korean Army sergeant on the run for two days after shooting and killing five of his fellow soldiers at a border post was captured alive by the military yesterday after a failed suicide attempt.

The suspect, identified by the surname Lim, shot himself in his upper chest at around 2:55 p.m. yesterday on a mountain in Hyeonnae-myeon, Goseong County, Gangwon, with a K-2 standard-issue rifle. After killing five of his fellow soldiers and injuring seven Saturday night, Lim fled from the frontline General Outpost (GOP) in Goseong with the rifle.

Lim’s suicidal act came after a day of efforts by the military to persuade him to surrender. His father and older brother were also at the scene of the standoff to plead with the suspect to turn himself in.

“At around 11:25 a.m., [Lim’s] father and brother arrived at the site and began talking [with Lim],” said Defense Ministry spokesman Kim Min-seok during a press briefing yesterday, shortly after Lim’s capture. “But the soldier did not do [what his relatives requested] and hurt himself.”

An official at the Ministry of Defense said the suspect, 22, remained conscious while being transported to Gangneung Asan Hospital in Gangwon on a military helicopter, though he suffered blood loss from the self-inflicted wound.

The suicide attempt ended a 23-hour standoff in the far northeastern border town of Hyeonnae-myeon, about seven kilometers northeast of the scene of the shooting rampage. During the manhunt, one platoon leader was shot in the arm allegedly by Lim on Sunday. Another soldier was shot in a friendly fire incident at dawn yesterday. Both are in stable condition, according to the Defense Ministry.

After the first exchange of fire between Lim and the military, the two sides squared off all throughout Sunday night and Monday morning as the authorities sought to capture him alive to discern the motive behind his deadly rampage.

In an effort to calm Lim down and talk him into surrendering, Special Forces soldiers got close enough to him yesterday morning to toss him a mobile phone. He had requested the phone to talk to his father. According to Defense Ministry spokesman Kim, the suspect talked to his father at 8:40 a.m.

Lim was also provided with bread, a bottle of water and ready-to-eat rations during the standoff by Special Forces members.

To prevent Lim from fleeing up the mountain, the military set up a three-layered cordon involving nine battalions in a three-kilometers (1.8-mile) ring.

The official said three unarmed Special Forces soldiers got within seven to eight meters of Lim accompanied by his father and brother before Lim shot himself. Just minutes before his suicidal act, Lim asked for a pen and a paper, apparently to write a suicide note. It was not clear yet what he wrote on the paper.

According to the JoongAng Ilbo, Lim told his father and brother before he shot himself that he couldn’t surrender because he would certainly face the death penalty for what he had done.

Contrary to earlier reports that Lim fled his post carrying his rifle, 60 bullets and one grenade, the official said he did not have a grenade.

After his shift on Saturday, Sgt. Lim threw a grenade and then opened fire on his fellow soldiers at around 8:15 p.m. in and around the barracks at the frontline General Outpost (GOP) in Goseong, killing five soldiers and injuring seven others. The Defense Ministry said Lim threw the grenade following the end of his shift and then fired multiple rounds with his K-2 rifle on his way into the building.

Lim continued his rampage inside the barracks, where his comrades were unarmed and vulnerable to attack. Those outside of the barracks at the time of the incident had already turned in their weapons following the conclusion of daily duties. It was not yet known whether there were armed soldiers present who could have stopped Lim. Lim, who was tasked with patrolling a fence along the demilitarized zone facing the North in Goseong, has less than three months until he was to be discharged from military service on Sept. 16.

A military official told the JoongAng Ilbo that Lim was a very introverted person but did not show violent tendencies during his military service. The Central Investigation Division at the Army Headquarters is now investigating Lim’s journals and counseling reports. Serving in frontline units patrolling the DMZ is known for being stressful and physically fatiguing work. The DMZ is two and a half miles wide and laden with land mines left from the 1950-53 Korean War. It spans the peninsula at the 38th parallel.

A joint memorial altar for the five soldiers killed in the spree was set up yesterday at the Armed Forces Medical Command in Seongnam in Gyeonggi. All able-bodied men in South Korea are required to serve in the military for 22 months. The South technically remains at war with North Korea.

The rampage in Goseong over the weekend comes just three years after an incident in 2011 in which a marine killed four fellow soldiers out of anger over what he believed was a coercive and hostile military culture. The suspect tried to blow himself up with a grenade but was thwarted.

In 2005, a private went on a shooting spree at an outpost in Yeoncheon County, Gyeonggi, killing eight soldiers and seriously injuring two others.

Both men were sentenced to death in courts-martial, though those executions have yet to be carried out. South Korea has not carried out an execution since 1998 though it still has a death penalty.