Carbon-fiber furniture weaves its way to top of art world

Carbon-fiber furniture weaves its way to top of art world

Is it art or furniture? When a chair created by Korean designer Roh Il-hoon was displayed last March at Tajan, an art auction in Paris, it had viewers pausing for a better look. At a quick glance, his chair and bench look like they were woven from thick, black string.

But Roh’s creations hold a surprise - they are much stronger than steel. Luno and Rami, the name of the chair and the bench, respectively, were constructed by hand-weaving carbon fiber.

European collectors’ interest in Roh’s carbon-fiber furniture is increasing. After the 37-year-old designer’s work was first placed on the international stage last April at Salone de Mobile Milan, an international furniture exhibition, his works were requested by the global fair Design Days Dubai and the Tajan auction.

The four furniture pieces displayed at the event in Dubai sold out, and the three pieces submitted for Tajan were bought for more than 20 million won ($196,542) in March and July. 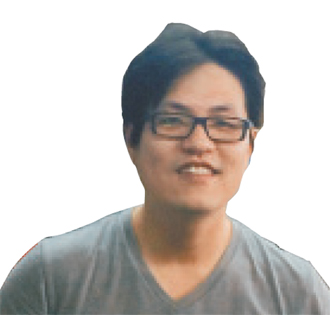 Roh received an AA Diploma from the Architectural Association and a master’s degree at the Royal College of Art in London. He was an architect at the renowned London architect firm Foster and Partners. In 2010 he opened the Il Hoon Roh Design studio. Now that he is a designer, he says there’s no difference between architects and designers.

The JoongAng Ilbo sat down with Roh at his studio in Yeongdeungpo Market, southwestern Seoul.

Q. What was your inspiration for making the Luno?

A. I started it because I was intrigued by human nerve cells. I wanted to make something from this unique structure. I didn’t plan on making furniture. These are the products of my curiosity.

Carbon fiber is usually called a “dream material”; it’s 10 times stronger than steel but only a quarter of its weight. How did you come across carbon fiber?

I wanted to use the complex nerve cell structure in my design and I found carbon fiber to be a suitable material for this. Experimenting with the structure led to a new subject. Carbon fiber feels like flexible string when working with it, but after heat treatment, it grows immensely in strength. I found out that Korea is the leading manufacturer of carbon fiber in the world when I was looking for it. I’m lucky because it would have been hard to work with carbon fiber in England.

What is working with carbon fiber like? I heard you weaved the furniture with your hands.

If you look carefully at the knots on the surface, it’s a structure of linked hexagons. I’ve messed up about more than 30 actual-size Styrofoam chairs in order to make the Luno [laughs]. Since there was no way of figuring out how it would turn out, every process was a continuous experiment. What’s just as important to me as making something is resolving curiosity through experiments and learning from them.

When I think about wind and gravity, and the texture and patterns of water and dirt, there’s nothing like nature that’s a good idea bank. I want to find patterns from natural phenomena and include them in my work. My works ultimately praise nature.

You studied both design and architecture. In what way do you think these two fields overlap?

I learned a lot at the design office. My immediate superior was Michael Jones, who led big projects like the British Museum, Stansted Airport and the Boston Museum. I don’t think architecture is limited to making buildings. I lead projects as if I were constructing a building [when I’m designing]. In this view, sculpturing and design are like architecture.

Does it get lonely sometimes working in a small building away from the famous architecture firm?

Even while working at an architecture firm, I made sketches of what I wanted to make during lunchtime. Right now, I’m doing something I’ve dreamed about for so long, and I like that. My next project deals with a screen with LED technology and there are more patterns to be designed. Just thinking about the upcoming experiments make my heart flutter.